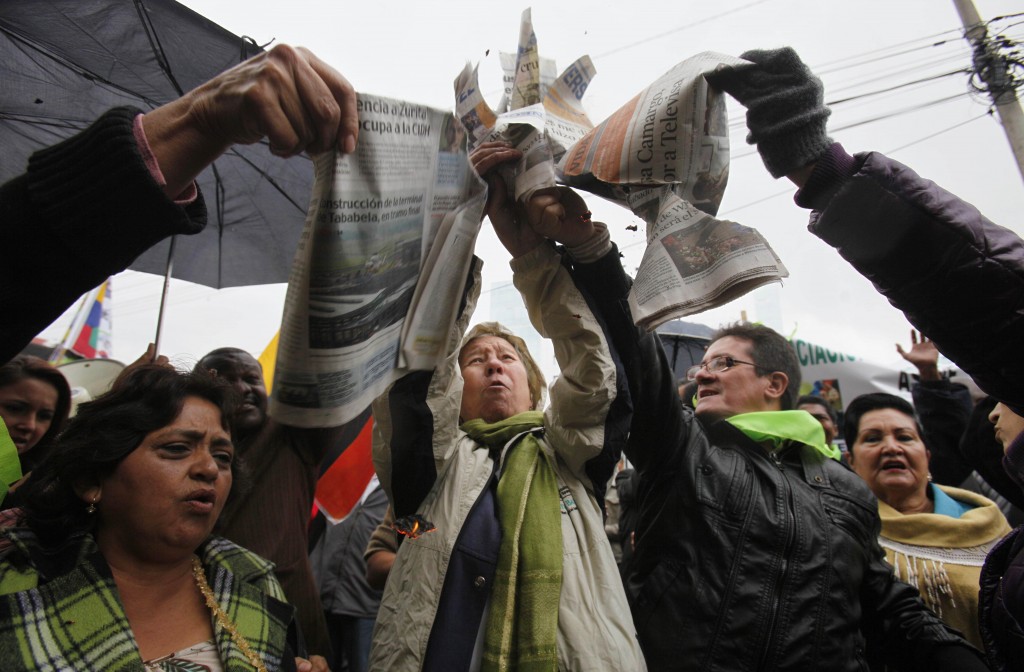 When it comes to his feelings about critical journalists, Ecuadorian President Rafael Correa doesn’t mince words.

In August, during his regular Saturday address, Correa called exiled journalist Emilio Palacio, who had recently written about Correa’s use of private jets, “a psychopath,” according to the press freedom group Fundamedios. He then asked those tuning in if they felt “like kicking a guy like that.”

Indeed much of Ecuador’s private press is feeling kicked around as the effects of the Correa government’s 2013 Organic Law on Communication, nicknamed the “Ley Mordaza” or “Gag Law” by journalists, have rippled through the country’s newspapers and radio and television broadcasters. That law, which Correa’s government argued would democratize media and improve its quality, has instead led to the closure of media outlets and a clampdown on investigative reporting, according to press freedom groups.

“Ecuador is probably one of the Latin American countries where freedom of expression is deteriorating most rapidly,” says César Ricaurte, executive director of the Quito-based Fundamedios, in an interview with Global Journalist. A woman looks on during a protest demanding press freedom in Quito, Dec. 9, 2009. (AP Photo/Patricio Realpe)

Fundamedios tallied 136 complaints against media with regulators, resulting in 42 sanctions and the closure of four news outlets between Oct. 15, 2013 and Sept. 25 of last year. Among the law’s many provisions, as summarized by the Knight Center for Journalism in the Americas, are a vague ban on “media lynching” of a person’s reputation and the downgrading of information from a fundamental human right to a “public good” open to government regulation. It also required that news be “verified, balanced contextualized and opportune” and that a news outlet’s failure to report on an issue of public interest “constitutes an act of prior censorship.”

The law also created two new agencies to monitor media outlets for compliance. Together, the newly created Council for Information and Communication Regulation and Development (Cordicom) and the Superintendence of Information and Communication (Supercom) employ 300 government officials to track and punish media outlets for violations, according to the Inter American Press Association.

The law formed the basis for two complaints filed with Supercom in June against the newspapers La Hora, El Universo, El Comercio and El Diario Hoy by Correa supporters. It accused them of not providing sufficient coverage of Correa’s visit to Chile in May, during which time Correa met with Chile’s president and received an honorary university degree.

“Under this article, the owners of newspapers can be accused of censoring information, which is nonsense, because it is their right as owners of a private newspaper to decide what they cover and what they don’t,” says Claudio Paolillo, the director of the Freedom of Press Commission of the Inter American Press Association (SIP).

Correa's defenders have argued that the law is necessary to rein in media outlets owned by wealthy opponents of the leftist president, and allow the voices of the people to be heard. They also argue that provisions aimed at ensuring media access for indigenous people and women and requiring a code of ethics for each outlet are welcome changes, and that criticism of the law has been amplified because of Correa's politics. Ecuador’s Coordination of General Communication office responded to a query from Global Journalist by requesting a list of questions for this article. After the questions were sent, it did not respond to further queries. Ecuador's President Rafael Correa, at a press conference at the country's highest court following a hearing in a libel suit against El Universo newspaper in Quito, Feb. 15, 2012. (AP Photo/Dolores Ochoa)

The newspaper El Diario Hoy has become the law’s most visible casualty. On June 29, the influential 32-year-old daily announced it was ending its print edition, singling out the government’s role in causing “the gradual loss of freedoms and constitutional guarantees in the country” and an “adverse” environment for independent media.

That came after a series of run-ins with the government, as documented by the press freedom group Reporters Without Borders. In August of 2013, it had been forced to offer a public apology for breaking the communications law by publishing photos of children killed in Syria. In September of that year, Correa tore up copies of El Diario Hoy and two other newspapers and accused them of violating the new law by giving insufficient coverage to a Chevron oil project that has led to long-running litigation with the government. In December 2013, a government announcement labeled a Hoy editor a “murderer by ink” and in June came the charges over insufficient coverage of Correa’s visit to Chile.

In July of this year, five days after El Diario Hoy’s closure was announced, Supercom removed its founder and director Jaime Mantilla from the company and fined it the equivalent of $57,800 for failing to publish the number of copies of each edition on its cover, according to the Inter American Press Association. In August, it laid off 154 employees.

"This law's intention is clearly to control, discipline, minimize, corner and bring the private media into line," says Ricaute, of Fundamedios.

Other casualties include a $90,000 fine levied by Supercom against El Universo for publishing a cartoon depicting a police raid on the home of a journalist who had filed a criminal complaint against Correa, according to the New York-based Human Rights Foundation. Another newspaper, Diario Extra, was fined the equivalent of 10 percent of its quarterly revenues for failing to correct headlines deemed “morbid,” according to Reporters Without Borders.

"Rafael Correa and his supporters think that only the government is right, that they have a monopoly on the truth," says Mantilla, El Diario Hoy's founder. "The government's objective is to eliminate the independent press."