Drawing a response to the Charlie Hebdo attacks 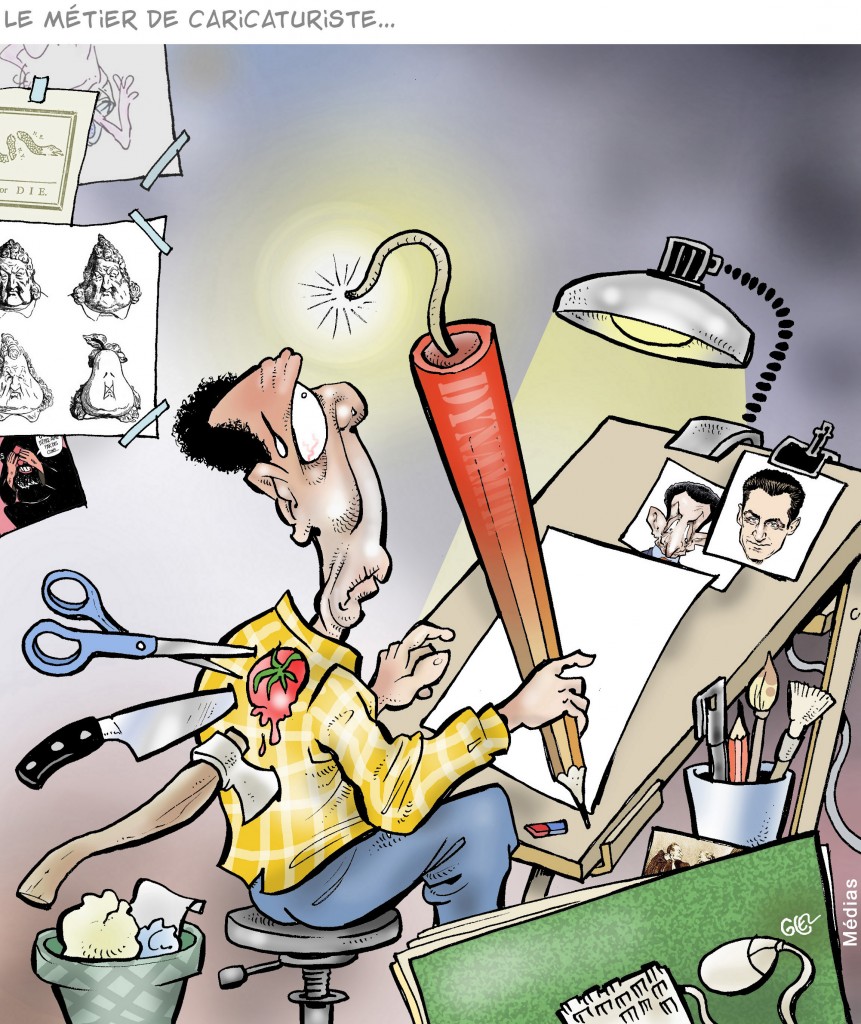 'We thought that the cartoonists that were most in danger were African cartoonists.'

The slaying of five French cartoonists in attacks by Islamic extremists Jan. 7 triggered massive demonstrations in France. And it made free speech martyrs of some of the satirical newspaper Charlie Hebdo’s leading lights: Charb, Cabu, Tignous, Wolinski and Honoré. Many cartoonists have paid tribute to their work by publishing sketches highlighting Charlie Hebdo’s dedication to freedom of expression. Among them was Damien Glez, a Burkina Faso cartoonist of French descent who knew some of the cartoonists killed.

Glez is an active member of the group Cartooning for Peace, an association created in 2006 at the suggestion of Kofi Annan, then the U.N. Secretary General, following the outcry over a Danish publication's caricatures of the Prophet Muhammed.

Glez is the director of Burkina Faso’s satiric newspaper Le Journal du Jeudi [the Thursday paper], based in the capital Ougadougou. His work has appeared in numerous other publications including the French outlets Le Monde, Le Figaro and Libération. Moved by the loss of his friends and colleagues, Glez spoke with Global Journalist’s Laura Welfringer about Charlie Hebdo and the future of cartooning and free speech.

Global Journalist: How has the Charlie Hebdo attack affected you?

Damien Glez: Like a majority of cartoonists, I am obviously hurt, shocked...Cartoonists are especially affected because we feel like we are all colleagues. Plus, I belong to an association called Cartooning For Peace, which gathers together cartoonists from all over the world. Several victims of the Charlie Hebdo massacre belonged to this association. We cartoonists, we generally don't like to talk much. But now we almost have no word to express our feelings. That's why we reacted by drawing some cartoons. "A pencil sharpener, please." Like other cartoonists, Damien Glez has responded to the Charlie Hebdo attacks by drawing. (Courtesy Damien Glez)

GJ: What was your relationship like with those who were killed?

Glez: I knew Tignous very well. We were friends. He had visited me in Burkina Faso in order to organize a workshop and an exhibition. We had spent a lot of time together. I also met Cabu through Cartooning For Peace. Needless to say, Cabu was a forefather for all cartoonists. He was about to turn 77 years old, and he embodied a whole part of the history of caricature. I also knew Wolinski, with whom I had displayed some of my cartoons in a gallery. Wolinski – who was 80 years old – and Cabu really were forefathers for the modern cartoons in France and in Europe.

GJ: How have you worked with Charlie Hebdo?

GJ: What was the significance of Charlie Hebdo in the cartooning world? Glez was a member of Cartooning for Peace along with some of the slain Charlie Hebdo cartoonists. (Courtesy Damien Glez)

GJ: Do you view the Charlie Hebdo attack as an isolated incident or part of something larger facing the press?

Glez: Of course, there are difficulties for the press all over the world, and notably on the continent where I have been working for 25 years: Africa…What is striking is that, until now, we thought that the cartoonists who were the most in danger were African cartoonists…We thought that it would not happen in a capital such as Paris, in France. And now we realize that finally all cartoonists face the same dangers. This also explains the existence of the association Cartooning For Peace […]. We understood that there can be a misunderstanding among cartoonists and also between cartoonists and their public.

GJ: Charlie Hebdo’s caricatures were notable for their biting humor. Do you think we can laugh at everything or are some subjects off limits?

Glez: I do think that we can laugh at everything. That being said, there are of course some limits. The French humorist Pierre Desproges used to say: “We can laugh at everything, but not with everybody.” It also depends on the context, knowing that today with the Internet, geographical context is disrupted. So when a Danish cartoonist depicts the Prophet Muhammed in Denmark for the Danish public who is likely to buy his/her newspaper, the cartoonist knows that his/her drawing can be seen in Syria within a few hours.

I would say that the matter is not to limit the laughter, but potentially to limit the nature of the laughter. So I think that we can laugh at everything, but not in all the ways. There is a moral code that cartoonists have to respect: one thing is that a cartoon should never be insulting. In addition, a drawing should not be mocking…If somebody draws a cartoon just to have a laugh at somebody's expense, there is no point to do that. Laughter has to be used in order to provoke a reaction among people on subjects that they tend to ignore. So, yes, we can laugh at everything. But if possible, it has to be done with good taste. But even bad taste can be a defensible style. "Who said we don't have a sense of humor?" (Courtesy Damien Glez)

GJ: Do you sometimes censor yourself?

Glez: There are two types of problems that a cartoonist can come across. At least, there are two types of problems that I feel worried about. A cartoon can potentially be the subject of a threat or a sanction. In that case, it can possibly lead me to reflect on my cartoon–but I do not really censor myself on [controversial] subjects. I have already been summoned by authorities in Africa because of political cartoons, and I have already been a bit threatened after I published these kind of cartoons, but I knew that it would happen. Likewise, Charb and Tignous have kept on publishing their cartoons in Charlie Hebdo despite threats and after the firebombing of their office in 2011. They knew that they were taking a risk. The real problem… is that a cartoon can be misunderstood. …Sometimes, we draw a cartoon and it is not very clear and somebody will see in the cartoon a trace of racism or a trace of anti-Semitism, even though the cartoon is not racist or even if it is not anti-Semitic. And this is where we try to be careful. Sometimes, some ideas come to our mind, but we say to ourselves : “Be careful, there is maybe an ambiguity there”…

Or maybe if I intentionally shock people on a subject, I will antagonize the readers, and my drawing will be completely useless. In Burkina Faso, there is a great sensitivity about the representation of sex. Burkina Faso is one of those countries that are extremely prudish, and where sex is never represented, including in cinema. I have been officially reprimanded for cartoons with a sexual connotation. But I have finally realized that it is useless to make a drawing which is too provocative on this subject in the Burkina context because if I do this, my drawing will not be read and there will be a mental block because of this. So we also kind of have to reflect strategically when we draw a cartoon.

GJ: You’ve worked both in France and Burkina Faso. How do you draw differently for people in the two countries?

Glez: As I said, a drawing can cross the borders. But for example, there are some codes that do not exist in some countries. A French cartoonist can use some images that an American cartoonist may not understand. A cartoon can be appreciated and lead to a wholesome discussion in some countries, but it can be counterproductive in other countries. In addition, the importance of text is different depending on each country. In countries where a majority of people are illiterate, we tend to draw silent cartoons. Glez's has been criticized by some African governments for his political cartoons. (Courtesy Damien Glez).

GJ: You recently did a piece of cartoon reportage on a camp in Chad for Sudanese refugees from Darfur. How is traveling to the field for this type of work different than how you normally work?

Glez: It’s true that a cartoonist is by definition a very solitary person, and typically somebody who works bent over his desk. But there is often the danger that we will be lonely and disconnected from reality. One way to prevent this is to join collaborative projects like Cartooning For Peace. Today we are about 120 cartoonists in this association and we regularly meet in different countries. For instance, we went to Tunisia when there were many tensions with the writing of the constitution.

More and more, cartoonists can really go on the field in order to make their drawings and in order to do something which is in between writing and drawing. This particular format lets us explore a kind of satire and a form of drawing that is somewhat different. We are not simply doing gags, we are not simply drawing funny vignettes, but we try to make complex points at length.