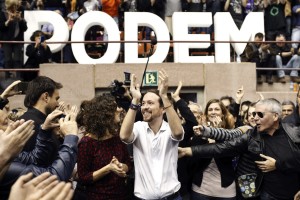 epa04536889 General Secretary of Spanish party Podemos (lit.: 'We Can') , Pablo Iglesias (C-R) and candidate for Podemos in Catalonia (Podem), Gemma Ubasart (C-L) are seen at a rally in Barcelona, Spain, 21 December 2014. Iglesias has reasserted his commitment with Catalonia's right to decide and has offered to open a constituent process to 'discuss with everyone about everything', but he also assured he will never embrace Prime Minister, Mariano Rajoy, or Catalonia's regional President, Artur Mas. EPA/ALEJANDRO GARCIA