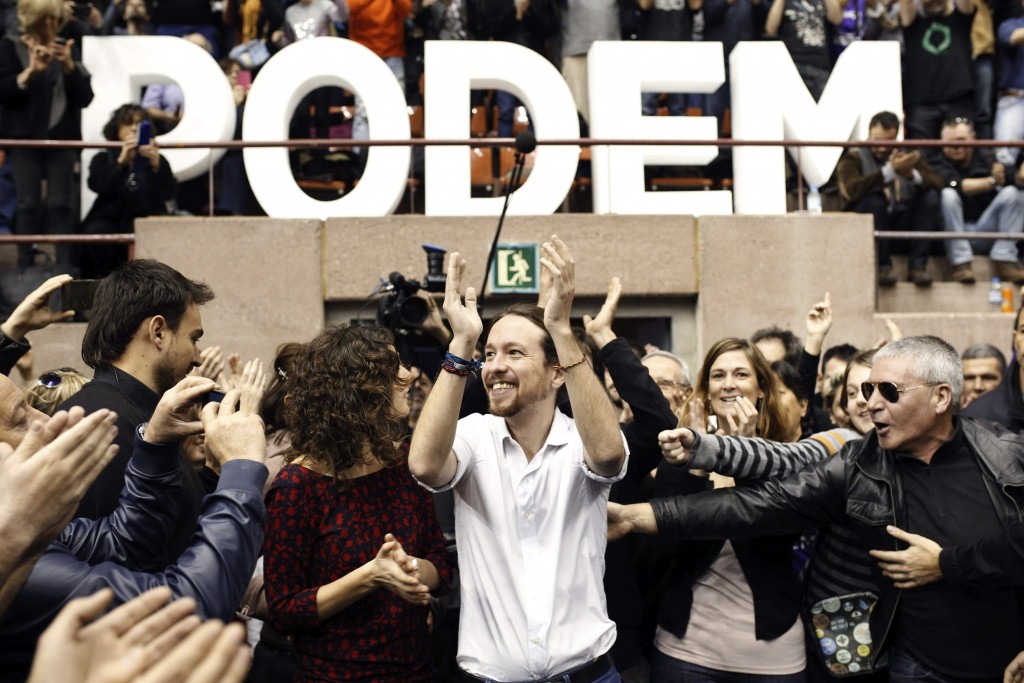 Were Spain to hold a general election today, polling shows that it’s next prime minister might be a pony-tailed 36-year-old political newcomer from a year-old far-left party barely a year old.

Such a move would be seismic. Pablo Iglesias, a former political science professor and the leader of Spain’s ‘Podemos’ (We Can) party, favors pulling Spain out of NATO, boosting government spending in heavily-indebted Spain and offering a guaranteed income to those out of work. Opinion polls have shown ‘Podemos’ in a dead-heat with the center-right PP for the past two months and ahead of the center-left socialists. The country is due to have a general election by December. Municipal and regional polls are slated for May.

While much attention after last year’s elections to the European parliament was focused on the rise of anti-immigrant far-right parties elsewhere in Europe, in Spain the rising force comes from the far-left. Podemos, which won five seats in Europe’s parliament last year, is heir to the 15-M or Indignants Movement, a series of citizen demonstrations that began in May 2011 to protest government corruption, bank bailouts and cuts to Spain’s safety net imposed by the government’s bailout agreements with the European Union, European Central Bank and International Monetary Fund.

“We have understood that political institutions do not have legitimacy anymore and that citizens do not only expect to be listened to, they want to vote about issues that affect them,” says Estefanía Torres, a Podemos candidate in last year's European elections from the northern region of Asturias, in an interview with Global Journalist. “Traditional parties take decisions looking to Europe and the economic interests of European markets and they ignore the real needs of the Spanish population.”

Podemos’ rapid success is also due to the telegenic personality of Iglesias, who has become a television superstar in recent months for his direct way of speaking and successful debates against leaders of the PP and Socialists. “They are getting huge audiences of more than 3 million viewers,” says Miguel Ángel Benedicto, the secretary general of the Spanis Federal Council of the European Movement, which supports European integration. “Only football games are at this level. Pablo Iglesias and his people know many languages and are more prepared than the average Spanish politician. They have transformed politics into a televised phenomenon.”

Podemos’ savvy use of social media has also aided its rise. Its use of Reddit as an organizational tool led the New Yorker to dub it “the world’s first Reddit party.” Similarly, an analytics report by Twitter showed that Iglesias, who has more than 749,000 Twitter followers, was the most tweeted about Spanish politician last year, the newspaper El Periodico reported.

“Podemos has understood something essential: people want to communicate, organize and create political content in a different way,” says Antoni Gutiérrez-Rubí, a a political consultant and communications adviser who works in Spain and Latin America. The traditional hierarchical and vertical organization of traditional parties in Spain, regardless of their political orientation, is collapsing because it’s not attractive for a creative and dynamic population.”

Ultimately, Podemos’ fate may be tied to that of its ideological ally Syriza across the continent in Greece. Polls have shown the anti-austerity Syriza leading ahead of that country’s Jan. 25 election, and the two parties have formed an alliance in an effort to counter the political dominance of northern Europe. Syriza’s vow to renegotiate with Greece’s creditors, increase public spending and nationalize banks has sent investors fleeing from Greek stocks and bonds and raised questions about whether Greece can remain in the European Union. Should a Syriza victory lead to further Greek economic collapse and isolation, Spanish voters may reconsider their support for Podemos. But if Syriza proves successful at governing, Iglesias may yet become a familiar figure on the world stage.