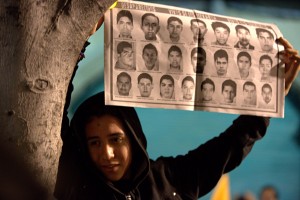 A protesters holds a poster with portraits of some of the 43 missing students during a massive march in Mexico City,Thursday, Nov. 20, 2014. Protesters marched in the capital city to demand authorities find 43 missing college students, seeking to pressure the government. Mexico officially lists more than 22 thousand people as having gone missing since the start of the country's drug war in 2006, and the search for the missing students has turned up other, unrelated mass graves. (AP Photo/Eduardo Verdugo)