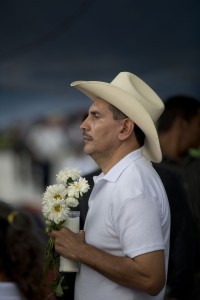 A relative of missing students marches with flowers and candles to protest the disappearance of 43 students from the Isidro Burgos rural teachers college in Chilpancingo, Mexico, Tuesday, Oct. 14, 2014. According to Mexico's attorney general none of the missing students were among the bodies found in the first set of mass graves outside the town. Authorities have said police involved in "disappearing" the students were working in conjunction with a local drug gang. (AP Photo/Eduardo Verdugo)