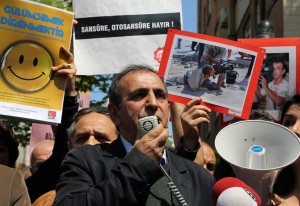 Ahmet Abakay, head of Turkish Journalists' Association, addresses his colleagues gathered to protest against attacks on journalists and media freedom in Ankara, Turkey, Saturday, May 3, 2014. US-based watchdog Freedom House has downgraded Turkey from “Partly Free” to “Not Free,” saying that the "Turkish press has never been under such threat before." House's Project Director on Freedom of the Press Karin Karlekar said conditions in Turkey, in terms of press freedoms, are getting worse, with many cases of journalists being fired and continuing censorship. The banner at center reads: "No to censor and auto-censorhip."(AP Photo/Burhan Ozbilici)