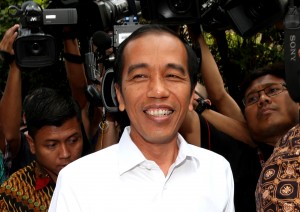 In this Oct. 17, 2014 photo, Indonesian President-elect Joko Widodo is mobbed by the media after his meeting with defeated candidate Prabowo Subianto in Jakarta, Indonesia. Widodo, popularly known as 'Jokowi', will be inaugurated as the country's new president on Oct. 20 and will have to quickly take steps to tackle major challenges, rebooting a slowing economy in a nation of 250 million where inequality is rising, a looming decision on raising fuel prices and also finding a way to work with a powerful and well-funded opposition that could block his moves. (AP Photo/Tatan Syuflana)