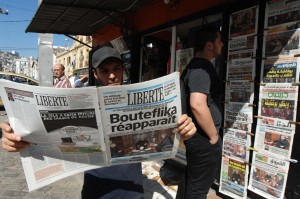 A photo of Algerian President Abdelaziz is published on the front page of a local newspaper at a newstand in Algiers, Algeria, June 13, 2013, a day after state-run APS news agency released photos showing Bouteflika in a military hospital in Paris. Algerian television showed Wednesday the first images of the country's ailing president who hasn't been seen in public since an April 27 stroke that sent him to France for treatment. (AP Photo/Sidali Djarboub)