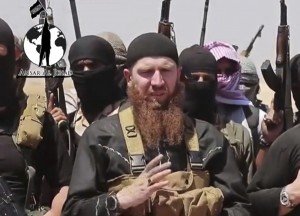 This image made from undated video posted during the weekend of June 28, 2014 on a social media account frequently used for communications by the Islamic State of Iraq and the Levant (ISIL), which has been verified and is consistent with other AP reporting, shows Omar al-Shishani standing next to the group's spokesman among a group of fighters as they declare the elimination of the border between Iraq and Syria. Al-Shishani, one of hundreds of Chechens who have been among the toughest jihadi fighters in Syria, has emerged as the face of the Islamic State of Iraq and the Levant, appearing frequently in its online videos  in contrast to the group's Iraqi leader, Abu Bakr al-Baghdadi, who remains deep in hiding and has hardly ever been photographed. (AP Photo/militant social media account via AP video)