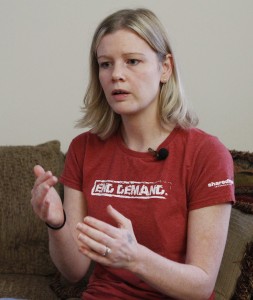 In this Tuesday, Nov. 22, 2011 photo, Holly Smith, 33, talks about her experiences when she was caught up in a child sex trafficking ring during an interview in her home in Richmond, Va. A new report says 41 states have failed to adopt strong penalties against human trafficking, and advocates say a patchwork of differing state laws makes it difficult for authorities to target the crime. Smith said a man at a mall promised her a job after she ran away from home at age 14. She said she was swiftly brought to a motel where two adults gave her a dress, put makeup on her face and dyed her hair. “Within hours I was on the streets of Atlantic City having men forced on me,” said Smith. (AP Photo/Steve Helber)