Recovering from a childhood interrupted by trafficking 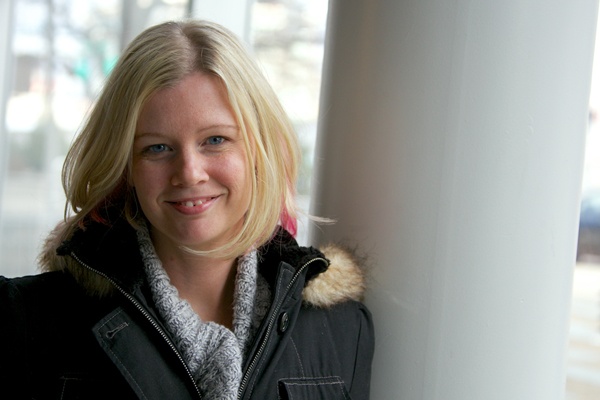 "The first man that I was sold to in Atlantic City was for 200 dollars, and he said that I reminded him of his granddaughter."

As a 14-year-old in New Jersey in 1992, Holly Austin Smith was briefly lured away from home and was trafficked by adults who profited from her sexual exploitation. The pimp who enticed her away at a shopping mall and raped her served just one year in jail.

Today she's a consultant for Amber Alert, the U.S. warning system for child abduction, and the author of "Walking Prey: How America's Youth Are Vulnerable to Sex Slavery."

As her story shows, sex trafficking in children is not just a problem in developing countries. But in the U.S., at least, attitudes towards the child victims are shifting. She spoke with Global Journalist's Laura Welfringer about her experiences, the risk factors that can allow teenagers to be pushed into the sex trade, and why children may not run away from those exploiting them. Global Journalist: How did you come to be sexually trafficked when you were 14?

Smith: It was the summer between eighth grade and my freshmen year...so I was really stressed out about the transition between middle school and high-school so it was a tough time for me. I was depressed. I was worried about losing my friends. I was worried about being beat up in high school. I was worried about finding a real boyfriend. So, like many young teenagers, I had a lot on my mind and I was a kind of freaking out.

I met somebody, at the local shopping mall. I was actually there with a group of friends and I noticed him watching me and he called me over to him, and so I walked over and exchanged phone numbers, and that was it.

It didn’t seem like a big scary thing because that was a quick exchange between us. And then we talked on the phone for about two weeks – mainly overnight. he said things to me that made me feel good about myself like I was pretty enough to be a model, I was too mature for high school, those things, you know, that made me feel really good, that was what every teenager wants to hear.

And he also painted this picture of this sort of glamor lifestyle that he led. He said that he traveled across the country and went to a lot of dance clubs and hung out with famous people.

After two weeks of talking [he asked] if I wanted to run away and skip out of high school–he could give me a real job and I could go to all these famous dance clubs with him. So I decided to run away and I met him at a different shopping mall and he bought a pair of red high heel shoes. I thought that he was buying them because we were going to a dance club that night.

He took me to a motel room and left me with [a] woman who got me ready. She put makeup on my face, put a dress on me and [did] my hair. Again, I thought we were going out that night. And when he came back, he started going over what he called “the rules."

Then it became very clear to me that he was talking about prostitution. And so, within just hours of running away from home, I was coerced into prostitution in Atlantic City, New Jersey. And the first man that I was sold to in Atlantic City was for 200 dollars, and he said that I reminded him of his granddaughter. GJ: So you were caught and you couldn't escape?

Smith: This is something that I talk about in my book. Often times images that are used for advocacy or for awareness of child sex trafficking... show pictures of girls tied up to beds and beaten up and drugged...In the United States, force, fraud and coercion are not required to constitute cases of child sex trafficking....People ask: "Why did you not run away? Were you trapped?"

For a 14-year-old girl, at least, for me, I can say that I wasn’t physically trapped but the age difference between me and these two adults that were telling me what to do and not asking me, you know, if this is what I had signed up for, if I was OK with what was happening, there was a real imbalance in power and an imbalance in control.

So, as a kid, I was naturally very unassertive and I think that they prey on kids who aren’t super-assertive...A lot of kids, if they are not told to say no or told to stand up for themselves or really told what to do in such a situation, they just don’t know. So I was just kind of… I think I was a little paralyzed. I wasn’t sure what to do.

Smith: [Less than two days later] I was arrested by law enforcement and sent home to my family. But law enforcement and my family and the court and mental health professionals who worked with me after that, I don't think they really understood the dynamics of my victimization. And without them understanding the dynamics, I did not understand. So for a long time, for years after that, I thought that the fault was mine because I had chosen to run away with this guy. And so I did struggle with shame and guilt for a long time. I guess I struggled with relationships in my twenties, without understanding that I was a victim...and that I had nothing to be ashamed of. In my twenties, I didn't think that I deserved to be in a really good relationship, so I struggled with bad relationships and drugs and alcohol.

GJ: How did you recover?

Smith: Things did change for me and in my mid to late twenties, I met my husband and I started to meet other survivors across the country. And meeting other survivors really helped to change my life. I did not only start to understand that I was a victim and that what happened to me wasn't my fault. And then through writing "Walking Prey," I researched human trafficking. I researched predisposing factors...what makes one youth more vulnerable than another...really understanding the crime and victimization involved in child sex trafficking and it helped me understand my whole life. GJ: How have attitudes around this issue changed over time?

...I can say that many adults that I came across, including therapists and law enforcement and family members saw me as the one to blame in that circumstance. People thought that if you didn't run away, then you must have wanted to be there.

Today, with all the advocacy and awareness and education, people are beginning to understand the mindset of children trapped in prostitution. So I was seen as more of a delinquent than a victim by a lot of adults in 1992. And on my first days of school, a lot of my friends had found out what had happened and I was called names... and so I did not make it through my first day [back at] school.  So I think that is a very important thing to know from my story: how much negative feedback I got from my community after my victimization. Today, locally, there is a lot of advocacy and awareness for victims of child sex trafficking, but something that I really push for is that the education, the advocacy, the awareness out there have to be balanced and has to be well-enforced.

What I mentioned earlier, the pictures of children drugged and tied to beds, in fact this story does happen to a lot of kids who are kidnapped and forced into prostitution. But believe it or not, a lot of the kids who are abducted, they are actually coming from a very tough background to begin with.

For example, in New York City, there was a girl who was kidnapped and held in a basement and prostituted in this basement. She managed to call 911 or somehow managed to make a phone call and get rescued, but it did not even make national news. And the reason is: she was a girl, a woman of color, she was being raised by her grandmother and she was a runaway. I think those factors tended to somehow make her less of a victim in a lot of people's eyes.

So I encourage advocates, when they create posters or images or talk about this topic, not to just talk about the force, fraud and coercion aspects of child sex trafficking, because especially when it comes to children, that's not required.