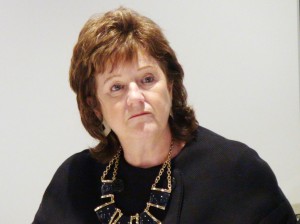 Sex abuse in Rotherham. Professor Alexis Jay during a press conference at the New York Stadium, Rotherham, following the publication of a report she wrote which found around 1,400 children were sexually exploited in the town over a 16-year period. Picture date: Tuesday August 26, 2014. Rotherham Council leader Roger Stone resigned today following the publication of the shocking report which detailed gang rapes, grooming, trafficking and other sexual exploitation on a wide scale in the South Yorkshire town. But council chief executive Martin Kimber said he did not have the evidence to discipline any individuals working for the council despite the report saying there had been "blatant" collective failures by its leadership at the time.See PA story INQUIRY Rotherham. Photo credit should read: Dave Higgens/PA Wire URN:20744398