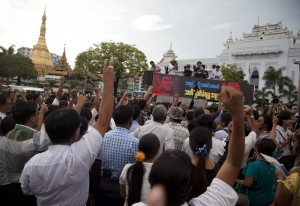 Activists and people shout slogans as they protest killing of a freelance journalist, outside the city hall Sunday, Oct 26, 2014, in Yangon, Myanmar. Myanmar's army on Oct. 4 shot dead a freelance journalist, Aung Kyaw Naing who was detained while covering clashes between ethnic rebels and government troops along the country's rugged border, saying he reached for a soldier's gun during an attempted escape. The circumstances of the case raised questions of whether Naing had died of abuse during interrogation by the army. (AP Photo/Khin Maung Win)