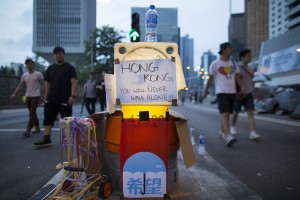 epa04427441 A sign written by pro-democracy demonstrators reading 'Hong Kong You Will Never Walk Alone' is displayed at a closed off street outside Hong Kong's government offices in Hong Kong, China, 02 October 2014. Hundreds of student protesters were blocking exits from the office of Hong Kong's leader early 02 October, as part of mass pro-democracy demonstrations in the Chinese territory. Hundreds of police were guarding the office of Chief Executive Leung Chun-ying. The students blocked the exits a five-minute walk away from the main protest site where thousands remained on the streets. Student leaders had called for Leung to resign on 02 October or they would occupy and 'paralyze the functioning' of important government offices. EPA/JEROME FAVRE