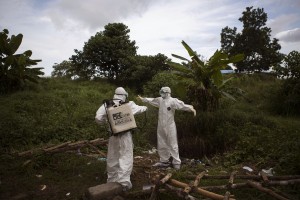 In this photo taken on Wednesday, Sept. 24, 2014, healthcare workers spray each other with disinfectant after working inside a morgue with people suspecting of dying from the Ebola virus, in Kenema, Sierra Leone, Thursday, Sept. 25, 2014. Sierra Leone restricted travel Thursday, Sept. 25, 2014 in three more "hotspots" of Ebola where more than 1 million people live, meaning about a third of the country's population is now under quarantine. Sierra Leone is one of the hardest hit countries in the Ebola outbreak sweeping West Africa that is believed to have killed more than 2,900 people, according to World Health Organization tolls published Thursday. (AP Photo/ Tanya Bindra)