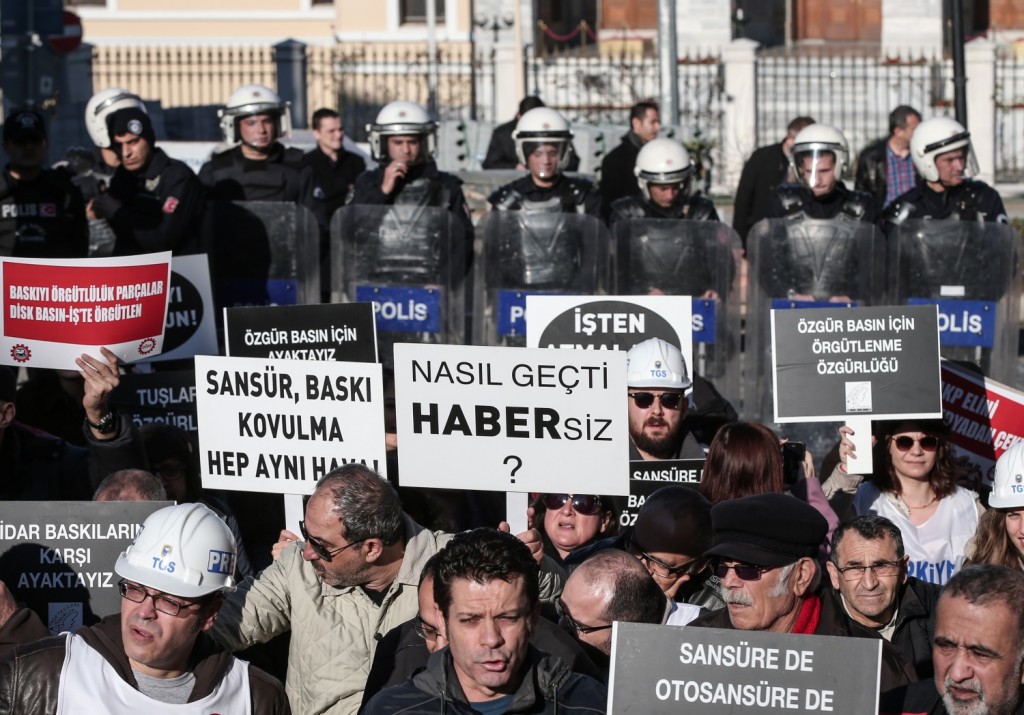 Turkish journalists hold placards that read " no to censorship and auto-censorships" and "what about news? " as they demonstrate outside the governor's office to protest censorship and new regulations on media freedoms and Internet bans, in Istanbul, Turkey, Sunday, Feb. 16, 2014. Critics say the new regulations will expand the government's already tight grip on the independent medias and Internet in Turkey, which is under criticism for censorship and restriction on media freedoms as Prime Minister Recep Tayyip Erdogan's government fights a corruption probe targeting people close to him. (AP Photo/Emrah Gurel)

After 11 years as prime minister, Recip Tayyip Erdogan became Turkey's first directly-elected president in August. Under Erdogan’s tenure, Turkey’s economy has grown significantly. The country’s main minority group, the Kurds, have gained new rights. And a military with a history of meddling in politics has been kept in its barracks.

But press freedom groups like Reporters Without Borders and the Committee to Protect Journalists have consistently criticized efforts by Erdogan’s AK Party to limit freedom of expression and of the press.

For example, criticism of Atatürk, the founder of modern Turkey, has been legally prohibited since 2005. Publications in Kurdish have been heavily censored. And during massive anti-government protests in Istanbul’s Gezi Park last year, CNN Turkey broadcast a documentary about penguins even as CNN International was covering the demonstrations. In February 2014, Turkey passed a law regulating the country’s internet services, allowing the government to shut down or block access to websites with little notice. Criticism of these policies from some Western governments has been muted in part because of the need for Turkish support in resolving conflicts in Syria and Iraq and between the Ukraine and Russia.

This week on Global Journalist, we look at the media landscape in Turkey, and what it means for Turkish relations with the west. Our guests: