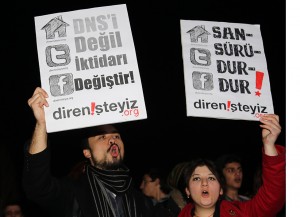 People shout slogans as they hold placards that read " stop censorship " during a rally against a bill which would, among other things, allow Turkey's telecommunications authority to directly block access to websites or remove content deemed to be violating privacy without a court decision, in Ankara, Turkey, Saturday, Jan. 18, 2014. Critics say the move will expand the government's already tight grip on the Internet in Turkey, which is under criticism for censorship and restriction on media freedoms as Prime Minister Recep Tayyip Erdogan's government fights a corruption probe targeting people close to him.(AP Photo/Burhan Ozbilici)