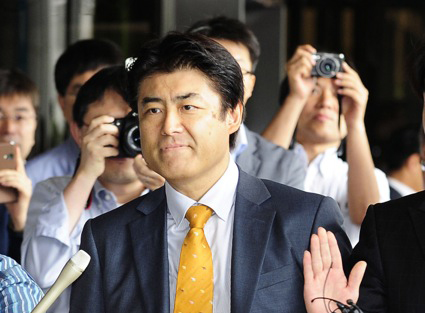 Prosecutors in South Korea will pursue legal action against a Japanese reporter who penned a controversial column about the whereabouts of South Korea's president on the day of an April ferry sinking that killed 300 people.

If convicted of criminal libel, Kato faces up to  seven years in  jail. The Japanese correspondent was banned from leaving South Korea in late August due to speculation over the column, Agence France-Presse reported.

At issue is a column in which Kato wrote about rumors that Park had visited a former legislative aide on the day of the ferry sinking, according to Yonhap. Park's office has said the president stayed inside the presidential compound on April 16, the day of the sinking. Park's popularity in South Korea plummeted in the wake of the disaster and questions over the government's maritime safety and emergency response preparedness.

The effort to prosecute Kato is "a good illustration of how criminal libel laws are used to suppress speech," the Wall Street Journal said in a Sept. 12 editorial.

The overloaded MV Sewol capsized after making a sudden turn, trapping many of the passengers in the hold of the sinking boat. Most of those on board were high school students on a school trip. The ship's captain and three other crew members were charged with murder following the accident.