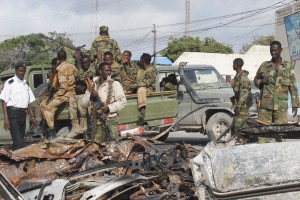 epaselect epa04306953 Somali troops look on in front of a wreckage of a car that exploded at the gate of the presidential palace in Mogadishu, Somalia, 09 July 2014, where gunmen from the militant group al-Shabab attacked the night before. Militants stormed into the compound detonating a car bomb and firing shots on late 08 July, in an attempt to take control of the buildings inside. President Hassan Sheikh Mohamud was not inside the palace at the time of attack. Somali security officers and African Union troops thwarted attacks after exchanging gunfire. Three attackers were killed and one was captured, said the presidential office in a statement. EPA/SAID YUSUF WARSAME