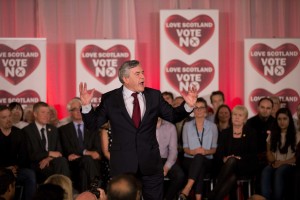 Former British Prime Minister and No campaigner for the Scottish independence referendum Gordon Brown gestures during his speech in at a No campaign event in Glasgow, Scotland, Wednesday, Sept. 17, 2014. Will the ayes have it, or will Scotland say naw thanks? No one is certain. Excitement and anxiety mounted across the country Wednesday, the final day of campaigning before Thursday's referendum on independence. With opinion polls suggesting the result is too close to call and turnout expected to reach record levels, supporters of separation feel they are within touching distance of victory — but wonder whether their surge in the polls will be enough. (AP Photo/Matt Dunham)