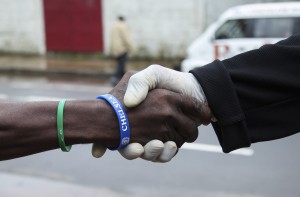 epaselect epa04334123 A man from Liberia wears a protective glove as he shakes hands as many in the city have started wearing in an attempt to stop the spread of the Ebola virus, Monrovia, Liberia, 28 July 2014. Over 660 people have died of Ebola in West Africa in 2014 making it the world's deadliest outbreak to date according to statistics from the World Health Organisation. Liberia has closed most of its border entry points and quarantined certain communities in an attempt to curb the spread of the deadly virus. Nigerian authorities have also confirmed the death of a Liberian man who was carrying the Ebola virus making it the first case in Nigeria following the outbreak in Guinea, Sierra Leone and Liberia. EPA/AHMED JALLANZO