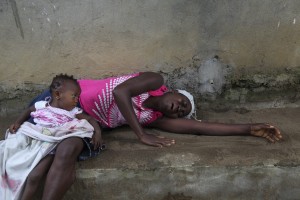 epaselect epa04343618 A Liberian woman weeps over the death of a relative from Ebola in the Banjor Community on the outskirts of Monrovia, Liberia 06 August 2014. According to statistics from the World Health Organisation (WHO) 932 patients have died from Ebola in West Africa with most of the latest deaths reported in Liberia. WHO officials are meeting in Geneva to discuss the global implications and response to the outbreak. In Nigeria a second person a nurse who treated an Ebola patient has died. EPA/AHMED JALLANZO