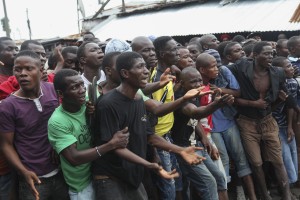 epa04362843 Liberian residents of West Point react as they wait for food rations to be handed out as part of governments quarantine plan for the area as a way of curbing the spread of the deadly Ebola virus in Monrovia, Liberia, 21 August 2014. The quartine in West Point and a national curfew are the most recent measures imposed by government in the fight to curb the spread. The World Health Organization (WHO) has said the number of deaths from Ebola has risen to 1350 in West Africa. EPA/AHMED JALLANZO