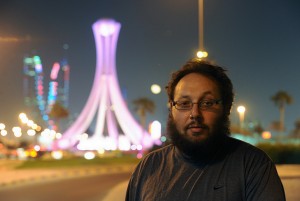 epa04381393 A picture made available 02 September 2014 shows US freelance journalist Steven Sotloff during a work trip in Manama near Lulu Roundabout, which later became the iconic center for the 2011 pro-reform protests in Bahrain, 26 October 2010. The Islamic State (IS) has allegedly beheaded the second US journalist, Steven Joel Sotloff, according to the monitoring group SITE Intel, which posted the information on its website on 02 September 2014. The IS militant group, which has taken over large swathes of Iraq and Syria in recent weeks, has demanded and collected ransom payments for European journalists and other hostages. The USA and Britain, meanwhile, have refused to negotiate with the terrorists. EPA/MAZEN MAHDI