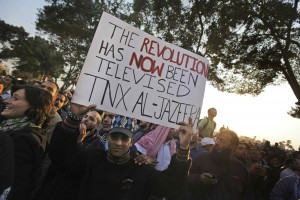 A protester holds a placard in support of Al-Jazeera television channel, outside the Egyptian state television building, in downtown Cairo Friday, Feb. 11, 2011. Revelers swept joyously into the streets across the Middle East on Friday after Mubarak stepped down as Egypt's president. From Beirut to Gaza, tens of thousands handed out candy, set off fireworks and unleashed celebratory gunfire, and the governments of Jordan, Iraq and Sudan sent their blessings. (AP Photo/Ben Curtis)