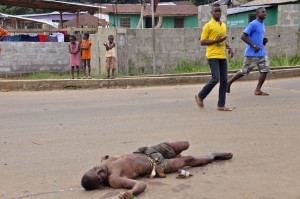 EDS NOTE GRAPHIC CONTENT - The lifeless body of a man lays unattended in the street as locals suspect him of dying from the deadly Ebola virus, as government warns the public not to leave Ebola victims in the streets in the city of Monrovia, Liberia, Tuesday, Aug. 5, 2014. A second American aid worker infected with Ebola arrived Tuesday in Atlanta, where doctors will closely monitor the effect of an experimental drug she agreed to take even though its safety was never tested on humans. Nancy Writebol arrived from Monrovia, Liberia, in a chartered plane at Dobbins Air Reserve Base and will join Dr. Kent Brantly in the isolation unit at Emory University Hospital, just downhill from the U.S. Centers for Disease Control and Prevention. (AP Photo/Abbas Dulleh)