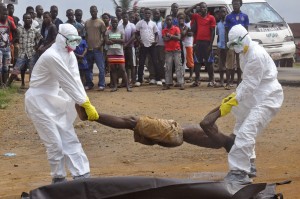 Health workers places the body of a man, inside a plastic body bag as he is suspected of dying due to the Ebola virus as people, rear, look on in Monrovia, Liberia, Thursday, Sept. 4, 2014. As West Africa struggles to contain the biggest ever outbreak of Ebola, some experts say an unusual but simple treatment might help: the blood of survivors. The evidence is mixed for using infection-fighting antibodies from survivors' blood for Ebola, but without any licensed drugs or vaccines for the deadly disease, some say it's worth a shot. (AP Photo/Abbas Dulleh)