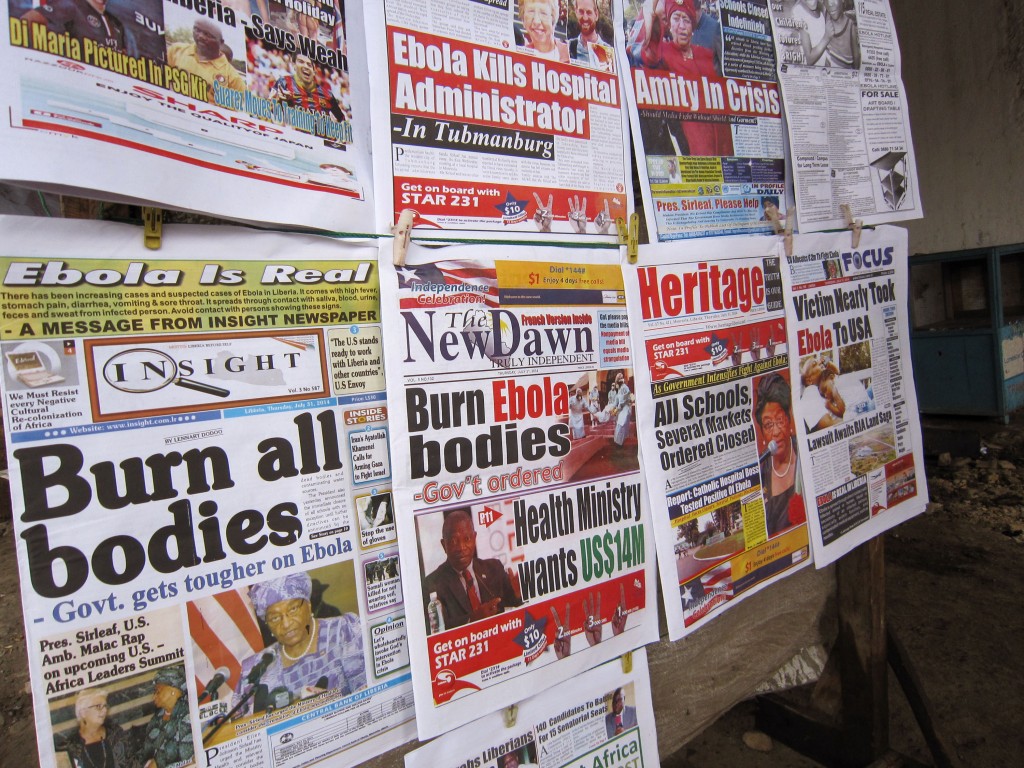 In the fight against Ebola, the death of a victim is only the beginning.

The current outbreak of the disease has killed at least 2,461 people in West Africa—and it is the bodies of the deceased themselves that in many cases has been responsible for spreading the disease.

That’s because Ebola remains contagious even in the bodily fluids of dead bodies—and can be spread when family members or others wash and prepare a body for burial. So a key component of the current effort to halt the spread of the disease is the deployment of specialized burial teams. Those assigned to the grisly job don white hazardous-material suits and disinfect the body with bleach before burying or cremating it.

But the most difficult part of the job may be convincing grieving family and friends to keep their distance from the body of the deceased.

"[T]hese are cultural and traditional practices that have been happening for thousands and thousands of years, so how do you tell people to stop that," says Misha Hussain, a Senegal-based journalist for the Thomson Reuters Foundation, who has covered the current outbreak.

"Trying to use education works to a certain extent but when you have a broad base of the population that hasn't been to school, can't read or write and they live in these local, kind of isolated, communities — trying to convince them that they can't practice their traditional burials because of an invisible killer, it just doesn't really wash with them," he adds. "And that's something that we're seeing: the WHO [World Health Organization], the government and health workers on the ground really fight against it, at the moment." Health workers move the body of a fellow health worker who was found dead in a seat, and who they believe passed away from the Ebola virus, at one of the largest hospitals in the city of Monrovia, Liberia, Aug. 16, 2014. Photo credit: AP Photo/Abbas Dulleh

Some residents in Liberia, the country with the most deaths from the disease, have tried to hide sick relatives in homes and churches. That led the Liberian government to threaten to prosecute those harboring suspected Ebola patients from medical teams. In late July in Dolo Town, about 50 miles (80 kilometers) east of the capital Monrovia, the family of a woman who apparently died of Ebola denied she had the disease and held a large funeral for her. Since then, 52 people have died in connection with the funeral, the Wall Street Journal reported, citing a local health worker.

Marcus Speare, head of an Ebola burial team in Liberia’s Margibi County, told the U.N. humanitarian news service IRIN that local people had stopped the team from picking up dead bodies and that in one instance, youths threw stones at the bus used to collect bodies. Sumo Wonder, a colleague of Spear, told the news agency that his parents had kicked him out of their house after he started burying Ebola victims.

Working to quell that distrust are aid groups such as Maryland-based Global Communities. The group’s Liberia office has been conducting outreach with leaders in local communities in an effort to change views. “The communities need to tell you when they have sick people so they can be treated in an appropriate way,” says Piet deVries, chief of party for the group’s Liberia program. Health workers places the body of a man, inside a plastic body bag as he is suspected of dying due to the Ebola virus as people, rear, look on in Monrovia, Liberia, Thursday, 2014. Photo credit: AP Photo/Abbas Dulleh

The aid group is also performing health education programs in three Liberian counties in an effort to change burial practices for those suspected of Ebola. That includes distributing transistor radios to those in isolated villages so that they can receive information about halting the spread of the disease.

Improving communication with those in rural parts of a country with few paved roads is important, particularly as Liberia is currently in its rainy season—making many roads all but impassable. In some cases, burial teams have had to walk for hours to reach victims of the disease—in some cases finding higher numbers of deaths than they had expected.

The official number of Ebola cases and deaths is likely significantly lower than the actual toll due to the disease’s spread to rural areas and the reluctance of some communities to report cases, says deVries.

Despite the challenges, deVries says his organization will soon be able to expand its efforts to support burial teams and educate local leaders about death rites across Liberia.

One source of hope is the ordinary Liberians who have signed-on to work on burial teams and care for those stricken with a disease with no cure, in spite of the stigma that comes with it. Another is 3,000 U.S. troops President Obama has promised to help stem the epidemic.

"Liberians are impatient to see these 3,000 troops touch down at the Liberian National Airport," says Ahmed Jallanzo, a Liberia-based photojournalist  for the European Photopress Agency who is covering the outbreak "Even if it's a minute, it's too late for these 3,000 troops to step down. It's welcoming news, everyone is waiting... I was just on the phone line at the treatment center — you won't believe it. When I get there with my colleagues, everyone rushed to us, 'Please can you tell us, when are the Americans coming?'"

Correction note: An earlier version of this story incorrectly attributed direct quotations to Misha Hussain of the Thomson Reuters Foundation.