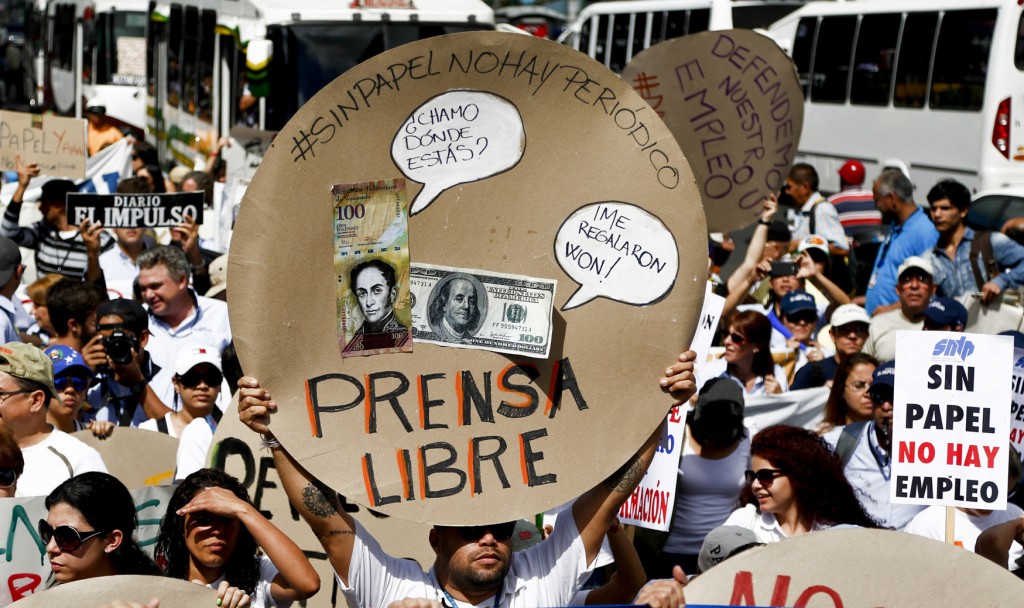 June 27 was Venezuela’s“Day of the Journalist.” This year, however, many journalists found little to celebrate.

Press freedom violations including assaults, intimidation and judicial harassment rose 28 percent in the year to June 15 over the same period last year, according to Espacio Público (Public Space), a press freedom group.

“This has been the worst year in a long time, there have been more attacks than in times of elections, during which there are usually many confrontations between journalists and security forces due to how polarized politics are in Venezuela," says Marco Ruíz, president of Venezuela’s National Union of Press Workers, in an interview.

Coverage of street demonstrations against the socialist government of President Nicolás Maduro led to much of the rise of the violence against journalists, according to the Committee to Protect Journalists, a New York-based press freedom group. Covering these protests is an “exceptionally dangerous assignment, with journalists subject to assaults, obstruction, detention, raids, threats, censorship orders and confiscation or destruction of equipment," the group reported on its website in April.

Among the incidents was the shooting of three journalists by security forces during protests May 14 – an attack that occurred even after the reporters identified themselves though they to the police as journalists and not protesters, Reporters Without Borders reported. One of those shot, Milfred Manrique of the newspaper Diario 2001, has had two previous run-ins with the police this year. On February 17, agents from Venezuela’s Guardia Nacional Bolivariana threatened her if she persisted in covering street protests. Two days later, she was beaten and tear gassed. In March, police broke into her apartment and seized three of her computers and her cell phone, according to CPJ.

Unfortunately those carrying out the attacks often enjoy impunity. There is "no punishment in Venezuela for those who hurt, intimidate, harass or attack journalists," Ruiz says.

Indeed Maduro’s security forces are responsible for 62 percent of the 205 attacks on journalists reported to date in 2014, according to the National Union of Press Workers.

Yet threats and physical attacks on journalists alone are not the only methods Maduro’s government has used to muzzle the press. A number of media outlets have been closed or taken off the air in the wake of recent demonstrations – or have stopped doing critical reporting about the government. The national newspaper El Universal, one of the few dailies critical of the government, was sold to a Spanish company in July after months of criticism by Maduro’s government. The company’s new owners fired 26 of its columnists, according to Voice of America. In May the country’s media regulator suspended the airing of the radio program Plomo Parejo (roughly translated as “Always Critical”), while it investigated complaints about the anti-Maduro show filed by government supporters. The Colombian television news channel NTN24 was taken off the air in Venezuela in February after its coverage of the protests. The moves came after the government slowed newsprint imports in an apparent effort to hurt newspaper production during the unrest.

"It seems that we're witnessing fundamental changes in the structure of journalism in Venezuela," Carlos Correa, the director  Espacio Público, told Voice of America. He said that the dismissals at El Universal are a way of "silencing those voices who are critical with the government of the president Nicolás Maduro."

Maduro’s government has also sought to co-opt critical news outlets, says Aymara Lorenzo, a journalist who formerly worked for Globovisión, one of the country’s largest television networks. Lorenzo, who spent 13 years with the network tells Global Journalist she was once able to do “good quality journalism…with respect for others and for my morals as a journalist and a citizen.”

She saw however, that the network began to disregard those values and surrender to “opportunism” in order to stave off economic or judicial repercussions from the government. In one incident, the network sought to block Lorenzo from airing an interview with blogger Yoani Sánchez, a free speech activist in Cuba, whose government is a close ally of the Máduro government. As a result, Lorenzo quit her job with the network in February—angered that it was not accurately reporting on the student-led protests against Máduro’s rule. Globovisión did not respond to repeated messages seeking comment on the incident.

Lorenzo says she did not want to be “part of the silence created by Globovisión” by not reporting the truth.

“I was told that I could not turn the program into a platform to make propaganda against Latin American leftist politics,” she says.

Ines Gaviria is a Spanish reporter currently working for Voice of America in Washington, D.C.