Scotland leaves independence up to voters 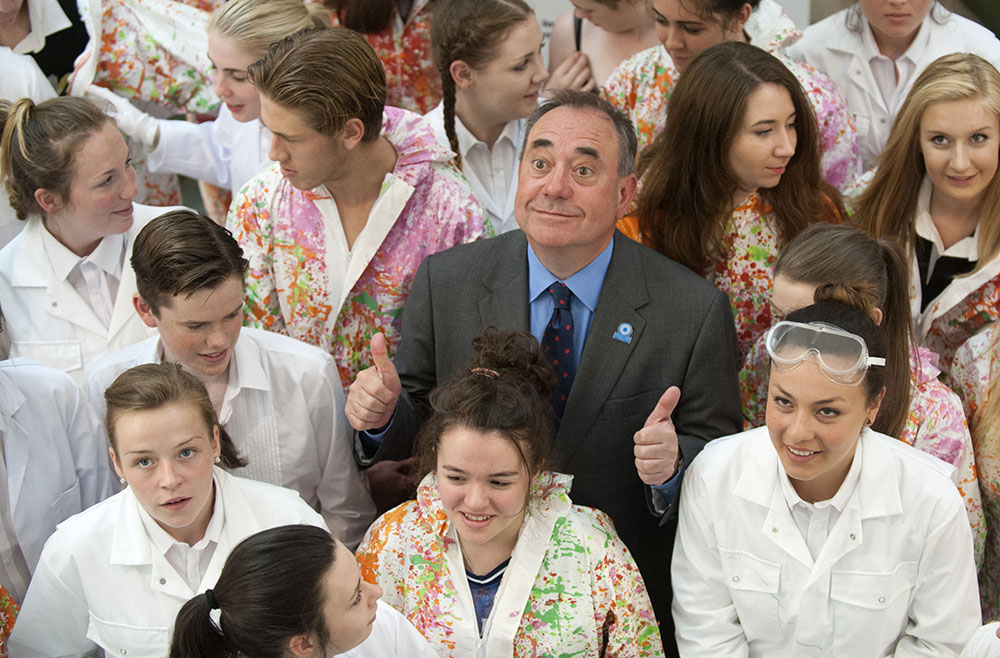 Scotland's First Minister Alex Salmond visits the Scottish Youth Theatre in Glasgow, to meet with the cast of Now's The Hour, a show performed by first-time voters aged 16 and 17 about their attitudes towards the forthcoming Scottish independence referendum. Photo: Jane Barlow/PA Wire

On September 18, voters in Scotland will determine if Scotland should become an independent nation.

The September referendum follows an unexpected majority victory by the Scottish National Party (SNP) in the 2011 Scottish parliamentary elections. Led by First Minister Alex Salmond, the party has long pushed for an independence vote, which has split voters. Those supporting an independent Scotland are led by the aptly-named Yes Scotland, and those who plan to vote 'no,' are led by the Better Together advocacy group spearheaded by Alistair Darling of the Labour Party.

David Torrance, a Scottish journalist who wrote the book "The Battle for Britain: Scotland and the Independence Referendum," said the vote correlates with the SNP's victory.

"The referendum is a direct result of the 2011 election," Torrance said. "It's not happening because there's been a massive increase in support [for independence]. It's actually caught the SNP more unexpectedly that they won the overall majority in 2011."

The SNP has waited until three years after the election to hold the mandated referendum, using the time to build greater support for independence, Torrance said.

According to Cristophe Crombez, a political economy professor at Stanford University, the SNP is one of several European political parties rooted in independence. In Spain, the Catalan Solidarity for Independence electoral coalition pushed for a similar independence vote for the Catalan region of Spain, which will be held on November 9.

Crombez notes that the SNP distinguishes itself from other nationalist parties by leaning left.

"The Scottish nationals are politically on the left or center-left," Crombez said. "Typically, most of the nationalist parties are found on the center-right or the extreme right."

Alex Salmond, the leader of the SNP during the 2011 election, has been active in the party since joining as a student at University of St. Andrews in 1973. David Cameron, a professor of political science at Yale University, believes Salmond led his party to do the impossible.

"Alex Salmond is probably the smartest politician in the United Kingdom," Cameron said. "They have a parliamentary system that is designed to make it impossible for the SNP to get a majority – low and behold, in the last election, the SNP got the majority."

Cameron notes that Scotland's additional member system, a semi-proportional voting system, is designed to prevent the election of single-party governments like the one currently in existence under the SNP.

Despite Salmond's individual success as a politician and the party's popularity in Scotland, many citizens oppose the SNP's push for independence.

In addition to pushing to remain a part of the UK, Better Together is also a proponent of devolution, which would give the Scottish Parliament much more autonomy to make decisions about schools, hospitals, and employment, while still benefitting from the security, trade network, and resources of the United Kingdom.

"From my point of view, what most Scots want is not independence - they want devolution," Cameron said. "The real question is can they get that. A number of people argue that the only way you're going to get that is if you vote yes to independence."

With the UK facing an upcoming 2015 general election and a potential 2017 referendum to vote on continued membership in the European Union, Westminster may be too distracted to implement substantive devolution reforms, Cameron said.

Supporters of Yes Scotland agree, noting that promises of devolution are not enough.

Lesley Riddoch, a journalist and outspoken supporter of independence, points out that there is little overlap in the political parties Scots and members of the greater UK vote for.

"Scots have voted for social democratic parties since the Labour party was formed – the rest of the UK has not," Riddoch said. "The tail – 5 million Scots – cannot wag the dog – 60 million folks in England."

"The parties in London are very weak in Scotland – they have only a handful of seats in the Scottish parliament," Cameron said. "Politically, they've lost just about everything they can lose in Scotland in terms of seats, so they don't have much at stake."

Should Scotland vote to remain in the United Kingdom, UK politicians may have little incentive to push for devolution reforms.