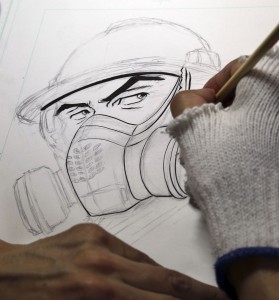 In this Monday, March 24, 2014 photo, comic-book artist Kazuto Tatsuta draws the main character in his comic "1F: The Labor Diary Of Fukushima Dai-ichi Nuclear Power Plant” in his studio outside Tokyo. First off, no one who works at Japan’s wrecked nuclear power plant calls it Fukushima Dai-ichi, Tatsuta says in his book about his time on the job. It’s ichi efu, or 1F. Tatsuta worked at the plant that suffered three meltdowns after the 2011 tsunami from June to December 2012 in part because he was struggling as a manga artist, but “1F” is his biggest success yet. “I just want to keep a record for history. I want to record what life was like, what I experienced,” he said. (AP Photo/Koji Sasahara)