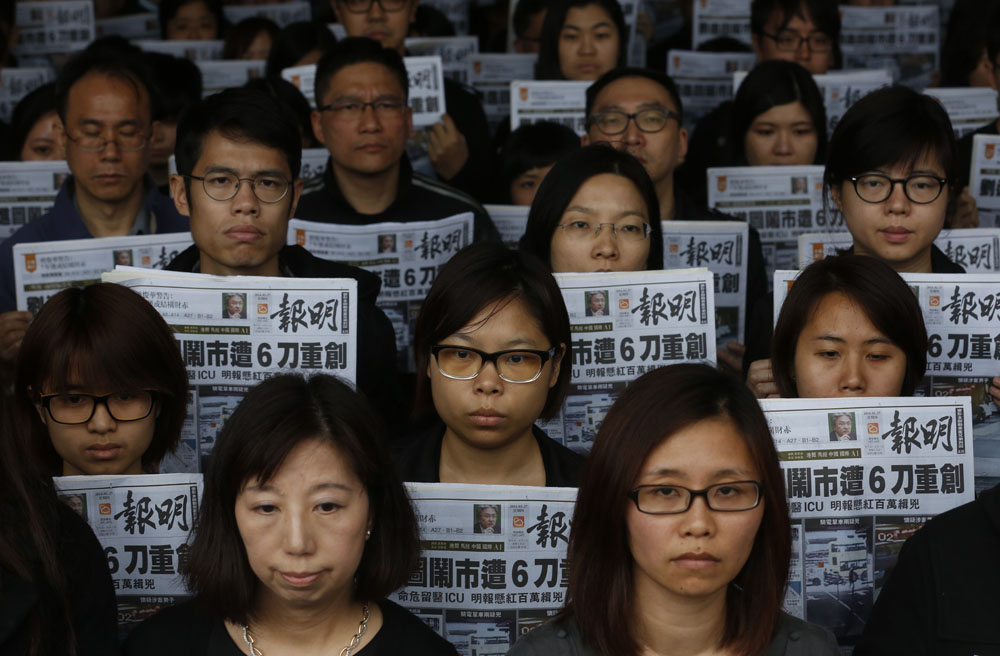 The British government expressed "serious concerns" about press freedom in Hong Kong in its recent six-month report. Presented to parliament by Foreign Secretary William Hague, the findings noted that even though people in Hong Kong "continued to exercise their basic rights and freedoms," the troublesome trends mentioned in the previous summaries haven't been resolved.

The report highlighted recent events in Hong Kong, including the beating of a local journalist by masked armed men, and the stabbing of Kevin Lau, the editor of the widely read daily newspaper Ming Pao.

The media linked the attack to Lau's work in investigating the death of dissident Li Wangyang, and to work looking into business deals of Hong Kong government officials and prominent figures in Mainland China. The people associated with the attack were found, but later released on bail. In this January 13, 2014 photo, former Ming Pao chief editor Kevin Lau Chun-to is seen outside his office building in Hong Kong. The former editor of a Hong Kong newspaper whose abrupt dismissal in January sparked protests over press freedom has been stabbed, police said on Wednesday. Police said a man wearing a motorcycle helmet “suddenly” attacked Kevin Lau on Wednesday morning with a knife and then fled on a motorcycle driven by another man. (AP Photo/Str)

The report also mentioned that several banks, including London-based banks HSBC and Standard Chartered, had pulled out their advertisement from the popular tabloid Apple Daily "in response to political pressure." Both banks said that any change in advertising were due to commercial needs.

Reuters reported that the Hong Kong Journalists Association said press freedom in Hong Kong "had entered its darkest period in decades and has set up a group to investigate complaints of media self-censorship amid fears that Beijing is tightening its grip."

Formerly a British colony and currently a Special Administrative Region of China, Hong Kong has a different political system than the rest of the country, serving as a business hub and international financial center. Last week mass protests demanding full democracy took place, according to Reuters.

"We believe that freedom of expression, including of the press, has played an important role in Hong Kong's success," the report said. "It is one of the fundamental freedoms protected by the Joint Declaration. As such, we take seriously concerns about press freedom, including fears about self-censorship. We welcome the Chief Executive's clear statements on press freedom and we will continue to monitor the situation closely."

However, local media have criticized the report for being to soft and "avoiding embarrassing Beijing." The South China Morning Post, a Hong Kong English language newspaper, quoted Democratic Party chairwoman Emily Lau Wai-hing, who said the report should have stood firm against Beijing's reinterpretation of the "one country, two systems" model.

In the Reporters Without Borders' 2014 World Press Freedom Index, Hong Kong was rated 61st. This is a drop of three places from last year. Reporters Without Borders said in the explanatory note that China, with its growing economic weight, has been influencing the media in Hong Kong, Macau and Taiwan, jeopardizing press freedom in the three these three special administrative regions. "The Chinese Communist Party's growing subjugation of the Hong Kong executive and its pressure on the Hong Kong media through its Liaison Office is increasingly compromising media pluralism there," the report said.