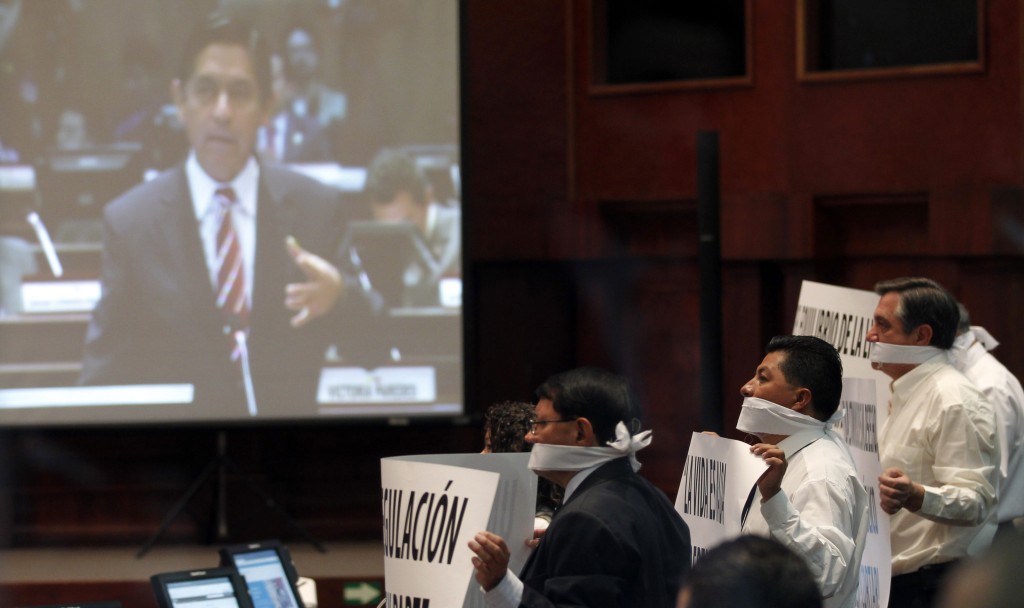 The Quito-based arm of the Ecuadoran daily newspaper Hoy has announced it will shutter its presses, blaming government censorship.

In an editorial published in its final print edition June 29, Hoy singled out the Ecuadorian government’s role in causing “the gradual loss of freedoms and constitutional guarantees” in the country. The editorial said the current state of affairs represents “a completely adverse scenario for the development of a pluralistic, free, independent newspaper.”

Ecuador’s controversial communications law, promoted by President Rafael Correa, was also named as a reason for the shutdown. The act, which went into effect last year, gives the government broad powers to regulate the content of the media. Not only does the law seek to ban “news likely to provoke social upheaval and disorder,” it is filled with ambiguous language dictating that journalists must remain balanced information or face legal penalties, according to France-based Reporters Without Borders.

The law created a state-run media watchdog group called the Superintendency of Information and Communications, or Supercom, to monitor media content. The threat of legal action against media organizations has caused many editors to spend most of their time working to clear articles of any potentially harmful information.

The act has come under criticism from several private media outlets and international press freedom advocates who believe it will have mostly negative effects, even earning it the nickname “Ley Mordaza,” or “gag law,” according to Freedom House.

Even before the act, the Ecuadorian press faced challenges when publishing unflattering content about the government. In 2012, Correa sued two journalists who wrote a book about his older brother, Fabricio Correa, whom the writers claimed had obtained $120 million in federal contracts. Correa also took action in a libel case against three directors from El Universo, an Ecuadorian newspaper. They were eventually pardoned, with each facing three-year jail sentences and multi-million dollar fines.

Hoy also cited declining advertising and the loss of school textbook publishing contracts resulting from government pressure, according to the Committee to Protect Journalists, a New York-based press freedom group.

According to Reporters Without Borders, Ecuador’s media landscape is characterized as a situation where “journalists and news media are also political tools in highly polarized countries where the polarization between the private sector and the public sector (or the state) develops into sometimes violent confrontation.”