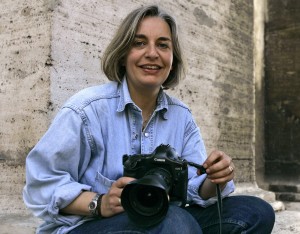 FILE - In this April 7, 2005 file photo, Associated Press photographer Anja Niedringhaus poses in Rome. Niedringhaus, 48, was killed and an AP reporter was wounded on April 4, 2014, when an Afghan policeman opened fire while they were sitting in their car in eastern Afghanistan. The International Women's Media Foundation announced Tuesday, April 15, 2014, that it has created a new award for courage honoring Niedringhaus. The award is funded with a $1 million gift from the Howard G. Buffett Foundation, a private family foundation that seeks to improve the lives of the worlds poor and marginalized _ often the subjects of Niedringhaus photographs. (AP Photo/Peter Dejong, File)