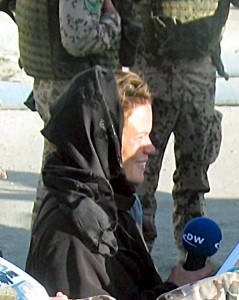 epa00836199 A file photo showing German journalist Karen Fischer with a patrol of German troops in Kabul, Afghanistan, 05 October 2004. A day after the killing of two German journalists in northern Afghanistan, the bodies of Karen Fischer and Christian Struwe were handed over to the German Embassy in Kabul, a spokesman at the Afghan Interior Ministry said Sunday, 08 October 2006. The two had been on their way from the northern province of Baghlan to neighbouring Bamiyan when they were shot dead at their camp in the early hours of Saturday morning. EPA/Karen Fischer