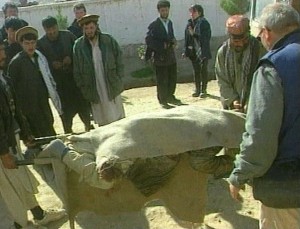 In this image made from television, the body of French radio journalist Pierre Billaud, is carried by members of the northern alliance, Monday Nov. 12, 2001, near Khwaja Bahuaddin, Afghanistan, after he was killed when he came under fire from Taliban forces in northeast Afghanistan on Sunday, Nov. 11. A second French journalist Johanne Sutton, was killed in the attack along with a German freelance journalist Volker Handloik. (AP Photo/Intermedia via APTN)