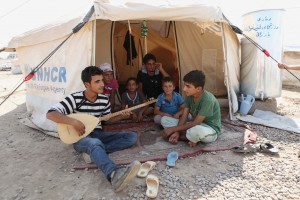 A Syrian refugee plays an oud, an Arabic instrument related to the lute, at Kawergost refugee camp in Irbil, 217 miles (350 kilometers) north of Baghdad, Iraq, Sunday, Sept. 22, 2013. The humanitarian needs in Syria are staggering. An estimated 6.8 million Syrians require assistance, a number equal to the population of Vermont, New Hampshire, Maine and Connecticut combined. Of that number, about 2 million have fled to neighboring countries. Even more somewhere between 4 and 5 million are displaced from their homes inside Syria. (AP Photo/ Khalid Mohammed)