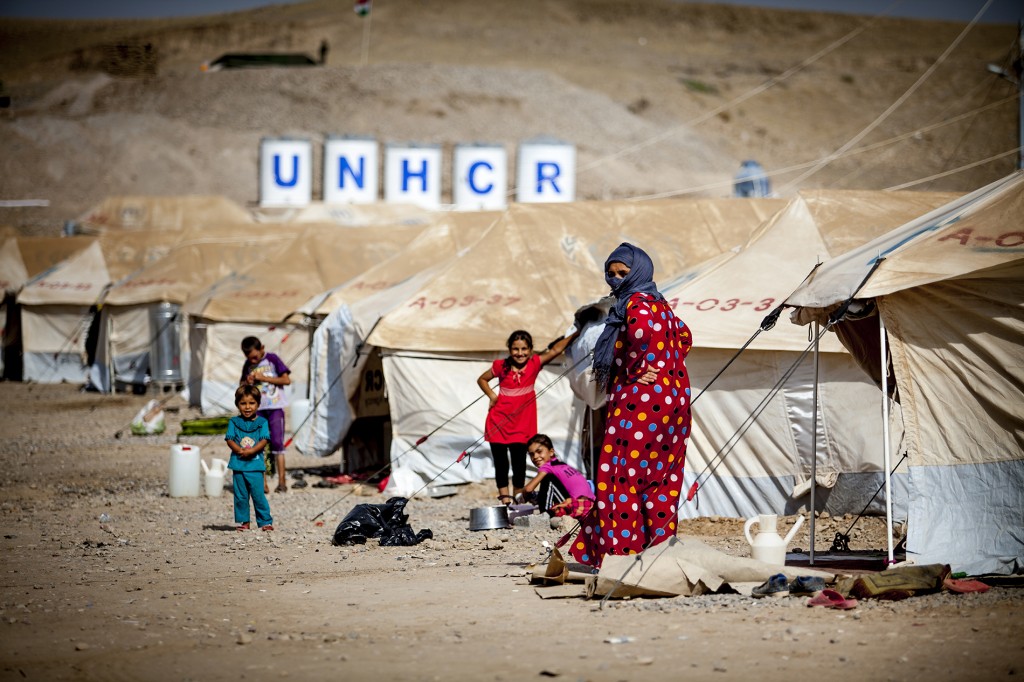 A refugee family in front of her tent with the UNHCR letters on barrels in the background, Sept. 3, 2013. (Copyright Flo Smith/NurPhoto/NurPhoto/Corbis / APImages) Syrian children who fled with their families from the violence in their village, sit on the ground at a displaced camp in the Syrian village of Atmeh, near the Turkish border with Syria, Nov. 8, 2012. (AP Photo/Khalil Hamra)

The Syrian civil war has led to the worst refugee crisis since the 1994 genocide in Rwanda. Civil war broke out in March 2011, and more than 9 million people have been displaced by fighting. According to the United Nations High Commission for Refugees (UNHCR) around 2.6 million Syrians have fled to neighboring countries and more than 6.5 million have been displaced within Syria. Children constitute at least half of the displaced population. A Syrian refugee man carries his baby as he makes his way through flooded water at a temporary refugee camp, in the eastern Lebanese Town of Al-Faour near the border with Syria, Jan. 8, 2013. (AP Photo/Hussein Malla)

Last December the United Nations announced an appeal for $6.5 billion in humanitarian aid for Syria. This is the biggest appeal ever made by the UN which estimates that nearly 17 million Syrians will require humanitarian aid this year. Starvation and flooding are two of the biggest threats to the Syrian population. Syrian refugees cross from Syria to Turkey via the Orontes River, near the village of Hacipasa, Turkey, Dec. 8, 2012. (AP Photo/Manu Brabo, File)

Syrian refugees have been fleeing to neighboring countries such as Lebanon, Turkey, Jordan and Iraq. According to UNHCR, more than one million Syrians are taking refuge in Lebanon, around 700,000 in Turkey, another 600,000 in Jordan and Iraq hosts more than 200,000 refugees. This Wednesday, Oct. 23, 2013, photo shows a general view of Zaatari refugee camp near the Syrian border in Jordan. With Syria’s civil war in its third year, more than 2 million Syrians have fled their country. About 100,000 live in this camp. (AP Photo/Manu Brabo)

Most refugees stay in crowded and unsanitary conditions while they try to make abandoned spaces and tents habitable. Refugees struggle with paying their rent as the living conditions for refugees continue to deteriorate. Syrian women stand in line waiting to collect aid from relief agencies helping refugees who fled into the eastern Lebanese border town of Arsal, Lebanon, Monday, Nov. 18, 2013. Thousands of Syrians have fled to Lebanon over the past days as government forces attack the western town of Qarah near the border with Lebanon. (AP Photo/Bilal Hussein)

According to the UNHCR, there are nearly 230 registered Syrian refugees for every 1,000 Lebanese, meaning refugees make-up a quarter of Lebanon's population. The Lebanese government has not set up any camps for Syrian refugees, and most of them live in rented housing, nomadic camps or are hosted by relatives. The Syrian refugee crisis has led to crushing social and economic consequences for Lebanon. In this Aug. 28, 2012, file photo, Syrians who fled their homes due to fighting between the Syrian army and the rebels shout slogans as they march toward the Turkish side of the border, during a protest asking the Turkish government to let them enter to their refugee camps, at the Bab Al-Salameh border crossing, near the Syrian town of Azaz. (AP Photo/Muhammed Muheisen, File)

The 22 government-run camps near the Syrian-Turkish border host 30 percent of the Syrian refugees that have fled to Turkey. The rest of them try to survive in local Turkish communities. According to the UNHCR, since February this year “more than 500 people have been arriving daily across official crossing points, sometimes as many as 1000-2000 daily.” By May 2013, the Turkish government had spent around $1.5 billion to support refugees. In this Thursday, Oct. 24, 2013, photo, a coach's assistant does a handstand while Syrian children play soccer at the Zaatari refugee camp near the Syrian border in Jordan. With Syria’s civil war in its third year, more than 2 million Syrians have fled their country. About 100,000 live in this camp. (AP Photo/Manu Brabo)

Jordan's three main camps host 20 percent of Syrian refugees. The refugee camp Za’atri accommodates 80,000 registered Syrians. Za’tari has become the fourth largest city in Jordan and the second biggest refugee camp in the world. The pressures of hosting the refugees have led to a government expenditure of more than $1.7 billion. Still, water and medicine are scarce. The rise in clashes between Syrian Kurds and anti-government Islamist militants has forced Syrian refugees to flee to Iraq. A majority of these refugees are housed in camps in Iraqi Kurdistan.  Almost half of the refugees in Iraq are children. The limited experience of local Kurdish authorities in such situations along with other problems and shortages are making the camp conditions difficult for refugees and the government. In this Thursday April 17, 2014 photo, Syrian children play under the heat of the midday sun at Zaatari refugee camp, near the Syrian border in Jordan. Life in this sprawling camp, Zaatari, is only getting harder for 130,000 residents, most of them fleeing fighting in south Syria. (AP Photo/Khalil Hamra)

Syrians are fleeing to other countries in increasing numbers. ‘Syrians are becoming a global refugee population,’ according to UN High Commissioner for Refugees António Guterres. “What kind of a world is this where Syrians fleeing this violent conflict have to risk their lives to reach safety, and when they finally make it, they are not welcomed or even turned away at borders?"