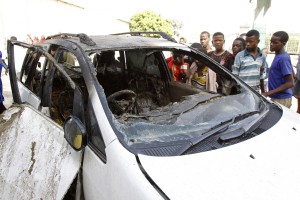 Somalis look at the smashed car in which a Somali journalist was killed by a bomb planted under his car in the Somali capital of Mogadishu, Saturday, June, 21 , 2014. No group has claimed the responsibility the Assassination of Yusuf Keynan, the editor of Mustaqbal radio in Mogadishu, who died as he started his mined car to go to work in the morning, according to Abdinasir Mohamed Ali, a colleague of the murdered reporter. (AP Photo/Farah Abdi Warsameh)