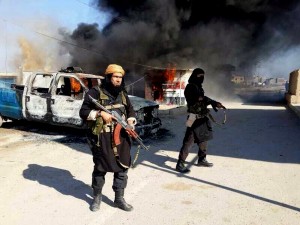 FILE - This undated file image posted on a militant website on Jan. 4, 2014, which is consistent with other AP reporting, shows Shakir Waheib, a senior member of the al-Qaida breakaway group Islamic State of Iraq and the Levant (ISIL), left, next to a burning police vehicle in Iraq's Anbar Province. For the al-Qaida breakaway group that overran parts of Iraq this week, the border between that country and Syria, where it is also fighting, may as well not even be there. The group, wants to establish a Shariah-ruled mini-state bridging both countries, in effect uniting a Sunni heartland across the center of the Mideast. (AP Photo via Militant Website, File)