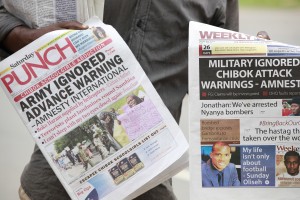 Vendors sell local newspapers, with headlines stating the military was alerted four hours before abduction of Government secondary school Chibok girls on a street in Abuja, Nigeria, Saturday, May 10, 2014. The weakness of the Nigerian armed forces was highlighted Friday in a report which said the military did not respond to warnings that Boko Haram rebels were about to attack Chibok, the town where the young women were abducted from their school. Nigerian security forces had four hours of notice about the April 15 attack by the rebels but did not react because of their fear of engaging the extremists, said Amnesty International, in a report citing multiple interviews with credible sources. (AP Photo/Sunday Alamba)