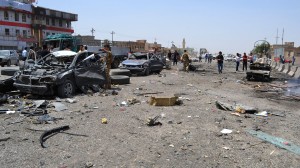 Civilians and security forces inspect the site of a suicide bomb attack in Tuz Khormato, 130 miles (210 kilometers) north of Baghdad, Iraq, Monday, June 9, 2014. A suicide bomber first drove his explosive-laden truck into a checkpoint leading up to the offices of the Patriotic Union of Kurdistan and the nearby Kurdistan Communist Party as people rushed to the site of the explosion and another truck bomb exploded, presumably detonated by remote control, said the Towns mayor Shalal Abdoul. (AP Photo/Emad Matti)