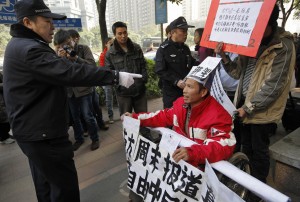 A policeman points to a supporter of Southern Weekly newspaper who is in a wheelchair before taken him away during a protest near the headquarters of Southern Weekly newspaper in Guangzhou, Guangdong province, China Thursday, Jan. 10, 2013. Police attempted Thursday to prevent more of protests outside the compound housing the Southern Weekly and its parent company, the Nanfang Media Group, in Guangzhou, a city long at the forefront of reforms. About 30 police officers guarded the area and ordered reporters and any loiterers to move away, saying there had been complaints about obstructing traffic. The influential weekly newspaper whose staff rebelled to protest heavy-handed censorship by China's government officials published as normal Thursday after a compromise that called for relaxing some intrusive controls but left lingering ill-will among some reporters and editors. (AP Photo/ Vincent Yu)