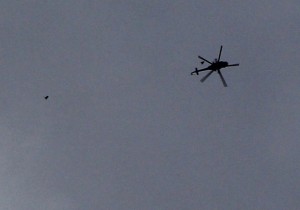 In this Sunday, Feb. 2, 2014, citizen journalism image provided by Aleppo Media Center (AMC), an anti-Bashar Assad activist group, which has been authenticated based on its contents and other AP reporting,Syria. Syrian government helicopters and warplanes unleashed a wave of airstrikes on more than a dozen opposition-held neighborhoods in the northern city of Aleppo on Sunday, firing missiles and dropping crude barrel bombs in a ferocious attack that killed dozens of people, including at least 17 children, activists said.