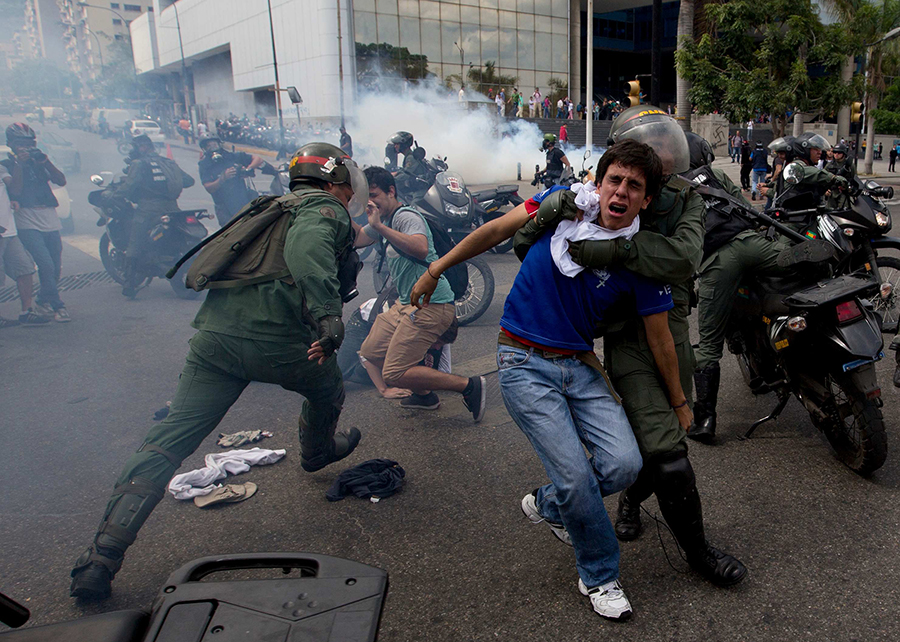 With peace talks in tatters, Venezuelans are deeply divided over the future of their country.

Four months after the start of street protests against President Nicolas Maduro’s government began, Venezuelans are deeply divided over the future of their country. Students, mostly from the middle-class, have been in the vanguard of demonstations against Maduro’s socialist government and policies that have led to spiraling inflation and shortages of basic goods.

On May 15, the opposition froze peace talks with the government following the May 8 arrest of more than 200 student protesters by security forces. The detention of protesters came after an April decision from the country’s Supreme Court restricting peoples’ ability to hold public demonstrations.

“The National Police and the National Guard took us by surprise,” said Shelly Sencherman, a student at the University Monteavila in Caracas. “They destroyed the protesters’ camps and took them all prisoners. As you can see, we can no longer camp in the streets, we cannot even march because there is a new absurd law that says that in order to convene a march, we have to ask the government, for permission.”

Venezuelan security forces have used unlawful force to try to break-up the demonstrations, said a May 5 report from Human Rights Watch. That includes severely beating unarmed protesters, shooting them at point blank range and collaborating with pro-government gangs to attack protesters. At least 42 people have died during the unrest, according to the Associated Press.

“Many students are afraid to go out,” said Leopoldo Chumaceiro, a student at the University Metropolitana in Caracas. “We risk our lives and expose ourselves to be bombarded with tear gas and to be shot.”

“The worst, however, is to be arrested,” he added, in an interview with Global Journalist. “We are not afraid of bombs or of getting shot because we can throw the teargas canisters back if we use gloves and we can also try to escape the shots. But, if you are detained, the guards hit you and torture you…Many have been beaten so brutally that they had had to go directly to the clinic after being released.” Masked anti-government demonstrators walk amid teargas fired by Bolivarian National Police during a protest to demand the release of arrested student protesters in Caracas, Venezuela, May 12, 2014. (AP Photo/Fernando Llano)

Excesses by the security forces have only served to harden the students’ views. “I was in one of the protests and the military fired tear gas into a nursery,” said Patricia Menuto, a student at the University Fermin Toro in Barquisimeto, a city about 230 miles (370 km) west of the capital Caracas. “They intimidated the women by telling us that they were going to rape us if we were taken prisoner.”

Hours after Menuto’s interview with Global Journalist earlier this month, a number of the university’s buildings were looted and burned.

Many of the students in the streets say they no longer trust the country’s political system. Maduro, the handpicked successor of former president Hugo Chávez, won a disputed election in April 2013 following Chávez’s death from cancer. Maduro won by less than 2 percent with the opposition claiming hundreds of voting irregularities, according to the Washington Post. The rancor of that campaign has fed the opposition’s discontent more than a year later.

“Imagine that you are in a competition and the referee is your mother,” says Daniela Arellano, a student from San Cristobal, near the country’s western border with Colombia, who is now in San Francisco. “Of course, she will do anything for you to win and she will allow you to do things that are supposed to be forbidden. That’s how politics are managed here. The National Electoral Council of Venezuela is controlled by the government and that’s why elections will never solve our problem.”

Students aren’t the only ones whose position has hardened. So too, have those of Maduro supporters, which are mainly government workers and the poor that have benefited from Chávez’s redistributive policies. They have criticized the protesters methods, which include stringing wire across streets to combat pro-government motorcycle gangs. Maduro himself labeled some in the opposition “fascists” during his inaugural speech last year, and warned of a U.S.-backed coup against his government.

“How can the media call this group of terrorists ‘students’ when they do nothing but cause trouble?”, said the administrator of a pro-government Facebook group Chavistas Por Millones (Millions of Chavistas), who agreed to be interviewed online so long as his name was withheld. “They have placed wires from one side of the street to the other and this has already slaughtered several motorcyclists.”

Many government supporters back restrictions on the country’s private media, which they view as controlled by wealthy businessmen out to serve their own interests. “The only real Venezuelan newspaper or TV station are those of the government,” said Juan Uzcategui, the director of Academia Tecnica Militar Bolivariana, a military academy. “Those of the opposition say the same lies. I still support the President Nicolas Maduro because he is doing a lot of good things, I am pro-Chávez to death, and we remain the majority because we all know Chávez was the best.”

On May 28, the U.S. House of Representatives approved new sanctions on Venezuela, including visa bans and asset freezes of those guilty of human rights abuses—a move opposed by the Obama administration. The same day, Venezuela accused the U.S. ambassador to the country of involvement in an alleged plot to kill Maduro—a charge the U.S. State Department labeled “false.”

The widening rift between Maduro’s government and the U.S. is reflective of the deepening divisions in Venezuela itself.

“There is a chance for the opposition to succeed [in ousting Maduro], but if that happens, either the revolutionary government will disappoint its people, or there will be a civil war,” said the administrator of Chavistas Por Millones. “In both scenarios, the opposition will be in big trouble.”

Says Arellano, one of the students: “The only way to end this totalitarian government is by taking to the streets.”