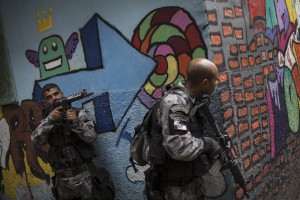 Military police officers patrol during an operation in the Mare slum complex, ahead of its "pacification," in Rio de Janeiro, Brazil, Tuesday, March 25, 2014. Elite federal police and army troops will be sent to the city to help quell a wave of violence in so-called "pacified" slums. Recent attacks on police bases in the favelas is raising concerns about an ambitious security program that began in 2008, in part to secure the city ahead of this year's World Cup and the 2016 Olympics.(AP Photo/Felipe Dana)