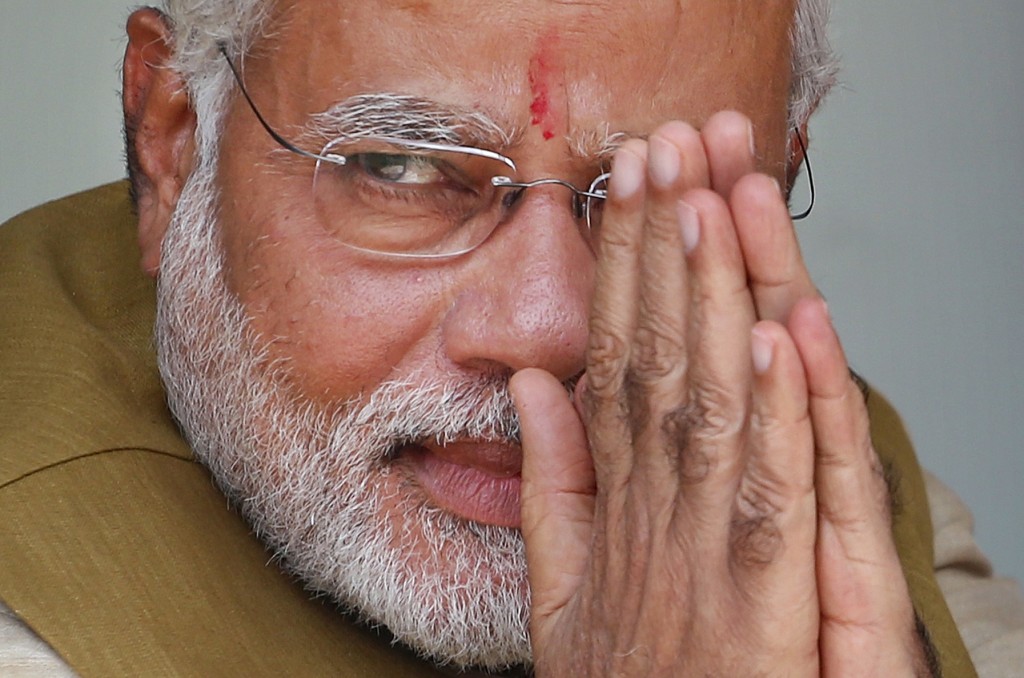 Opposition Bharatiya Janata Party (BJP) leader and India's next prime minister Narendra Modi greets the gathering at the home of his 90-year-old mother in Gandhinagar, in the western Indian state of Gujarat, Friday, May 16, 2014. Modi won the most decisive election victory the country has seen in more than a quarter century and swept the long-dominant Congress party from power, partial results showed Friday. (AP Photo/Saurabh Das)

As the results of India’s national election came in last week it was quickly evident that Lok Sabha, the lower house of parliament, would be dominated by one party. Incoming prime minister Narendra Modi’s Bharatiya Janata Party swept the election, taking 283 of the parliament’s 543 seats. Together with his coalition partners Modi will control 336 seats. The main opposition, the Indian National Congress party, won just 44 seats after previously controlling 209.

Many are heralding the BJP majority as a mandate for the government to overcome the the political gridlock that has dampened the effectiveness of outgoing Prime Minister Manmohan Singh’s coalition government, which was further undermined by a series of corruption scandals.

“I think you saw a backlash to that in this election,” said Tanvi Madan, foreign policy research fellow at the Brookings Institute in an interview with the Global Journalist. “[The new] government is likely to show more direction than past coalition governments... We have to wait and see, but I think the signs so far have been positive.”

Many voters are hoping that Modi can transform India’s economy in the same way that of Gujarat boomed under his tenure as chief minister, when the state’s economy grew by 10.1 percent annually from 2001 to 2012, according to Bloomberg data. During his four terms as chief minister, electricity and quality roads spread throughout the state and Modi burnished its international image through a series of “Vibrant Gujarat” investor conferences. Still critics argue that much of Gujarat’s growth failed to reach the poorest. As highlighted by Quartz, infant mortality in the state continues to be below the national average and one measure of child malnutrition, the percentage of underweight children under 3, spiked to an astonishing 70 percent during his early years in office.

Further some opponents of Modi are concerned for the future of Muslims and other religious minorities in India under the Hindu-nationalist BJP. A history of violence and marginalization against minorities marred Modi’s tenure as in Gujarat. Most notably, religious rioting in the state in 2002 left around 1,000 dead, mainly Muslims, as the police stood by. Allegations of state complicity have followed Modi ever since.

And despite the resounding win at the polls, Modi and his BJP allies won’t have quite the free hand at governance such a massive victory might imply. They will still have to cooperate with the Indian National Congress party, which controls a plurality of India’s state governments—andhas a majority in the state government-appointed Rejya Sabha, the upper house of parliament.

“[Modi] still needs to show that he’s a willing partner, not only to Congress but to the other regional parties as well,” said Anish Goel, South Asia Fellow at the New America Foundation in an interview with Global Journalist. “India’s system is very decentralized when it comes to foreign investment and economic growth, that’s partly why Modi was able to have such impressive effects when he was governor of Gujarat.”

Many have seen this year’s election as a fall from grace for the INC. The party of Mahatma Gandhi that won India’s independence has been tarnished by corruption scandals and ineffective management of the country’s economy, which has lagged that of China in recent years.

Since 2010, however, the party’s policy failures — which some classify as welfare-focused and redistributive — and corruption scandals have been blamed for India’s stagnating economy. In this election, with just 44 seats, they did not even meet the 54 seat minimum for qualifying as the official opposition. With their partners in the United Progressive Alliance, the center-left party will have the influence of only 59 seats in the lower house.

The INC, however, is still the leading party in 12 of 29 state governments, which exercise a great deal of autonomy in India’s decentralized system, compared with the BJP’s four. Questions about the future of their strategy and leadership are most important now for the party. With Prime Minister Singh, 81, resigning, the party is firmly in the hands of the Gandhi family. Sonia Gandhi, widow of the assassinated former prime minister Rajiv Gandhi, is set to be reelected as party president. Her son Rahul Gandhi, who ran Congress’s unsuccessful campaign, is likely to remain a influential. That raises the question as to how the party will adapt after its worst electoral showing in Indian history. Congress party Vice President Rahul Gandhi addresses the media, as his mother and party President Sonia Gandhi stands by his side outside the party headquarters in New Delhi, India, Friday, May 16, 2014.  (AP Photo/Altaf Qadri)

“They still have various platforms though which they can be heard,” Madan says. “The questions that lie ahead of them, first and foremost are what they do internally as a party, who their leaders are going to be, the issues they are going to run on, and how do they do this in a way that is not so negative.”

To be sure, the BJP’s sweep of the lower house has granted the party a reservoir of political capital. By tapping into the public’s frustrations with the country’s lagging economy and political gridlock, it was able to portray Modi as the man who can make change happen quickly. Whether Modi can deliver on those promises remains to be seen, given his opponents’ power in the upper house and state governments. But for now, some see the BJP tide running into 2016 assembly elections.

“They may just get a few more seats,” said Colleen Branganza, a journalist with the Hindustan Times. “I don’t think that the BJP being in a minority in the upper house will be a big draw back for them.”