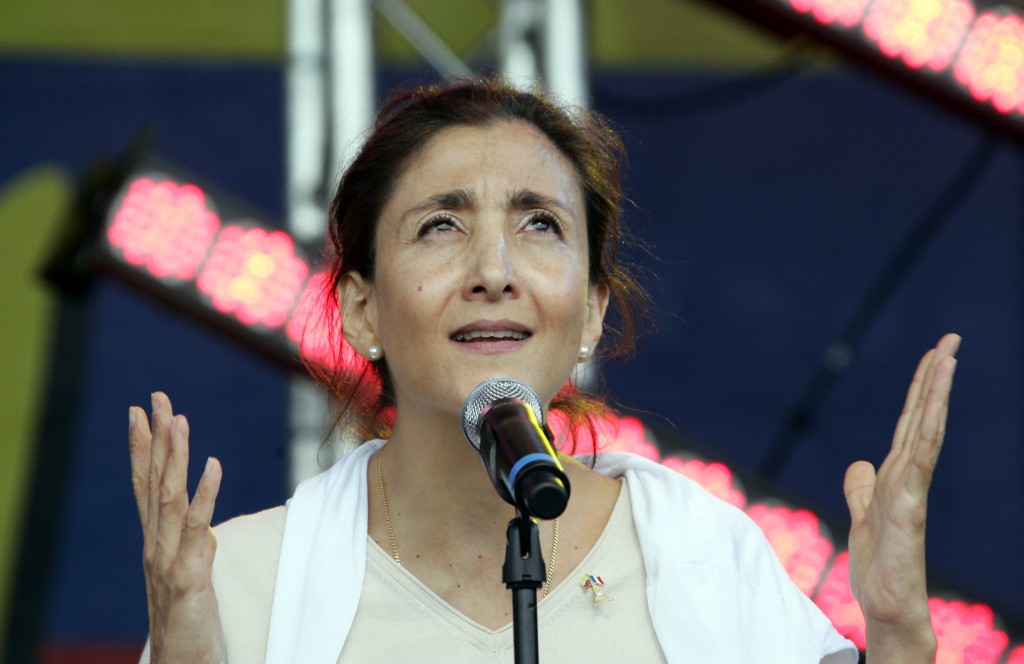 Franco-Colombian Politician Ingrid Betancourt addresses to the audience during a concert in celebration of Colombia's independence day and to support a march against kidnapping at Trocadero plaza near the Eiffel Tower in Paris, Sunday, July 20, 2008. (AP Photo/Francois Mori)

Six years after being rescued from her captors, a former Colombian presidential candidate seeks solace in religion

After she was caught during her fourth escape attempt, Ingrid Betancourt was beaten and led by a chain around her neck back to her cage in the Colombian jungle. Yet even as her kidnappers from the FARC guerrillas cried out in victory as she was paraded through camp, she felt that she had grown stronger.

“I knew that in a way I had gained more than I lost,” Betancourt wrote in her memoir, ‘Even Silence Has an End: My Six Years of Captivity in the Colombian Jungle.’ “They had not managed to transform me into a monster thirsting for revenge. I expected the physical pain to hit when I was at rest, and I prepared myself for the onset of my mental torment. But already knew that I had the ability to free myself from hatred, and I viewed this as my most significant conquest.”

Betancourt had been running for president of Colombia in 2002 as leader of the Oxigeno, or Green Party, a new force in Colombian politics. The French-Colombian scion of a well-known political family—her mother had been a senator and her father a diplomat—she was an ideal target for the FARC, a leftist guerrilla group that had become involved in kidnappings, extortion and drug-trafficking. In February of that year she was travelling in the San Vicente region south of Bogota when her car was stopped at a FARC roadblock, and she was captured. In captivity, she was repeatedly beaten, suffered from malnutrition and nearly died of hepatitis.

Today, six years after she was freed in a daring commando operation, Betancourt says she no longer has the psychological strength for the cut and thrust of politics. A student of theology at Oxford University, she is focused on spirituality. Hostage Ingrid Betancourt reacts as she rides in a helicopter during a Colombian military mission that rescued her from captivity in an unknown location in Colombia's Guaviare state. (AP Photo/Colombian Army)

“The experience of captivity changed my relationship with God,” she told Global Journalist, in an interview. “It started to be a real conversation with someone whose presence I couldn’t be ignorant of anymore. Wherever I looked for God, I found him.”

For the FARC, or Revolutionary Armed Forces of Colombia, Betancourt’s kidnapping was a coup. Founded as a Marxist guerrilla movement in the 1960s seeking to overthrow the Colombian government, by the 1990s it was enmeshed in battles with right-wing paramilitary groups and turned to drug-trafficking to finance its operations. By 2006, the group supplied more than 50 percent of the world’s cocaine, according to the U.S. Drug Enforcement Agency. Kidnappings, extortion, and unofficial taxes on peasants in FARC-controlled areas also funded the group. In 2012, the group agreed to peace talks with the Colombian government, and though it has lost influence, it still controls about 40 percent of Colombia’s territory.

Betancourt’s release in 2008 was widely hailed. She was given the French National Order of the Legion of Honor and nominated for the 2008 Nobel Peace Prize. Still, her life after more than six years in captivity hasn’t been without difficulty. The children she left behind had become adults. Her marriage had withered and she and her husband, Juan-Carlos Lecompte, went through a well-publicized divorce. A 2009 book by three American hostages who were held with Betancourt depicted her in an unflattering light. Her efforts to seek $6.8 million in damages from the Colombian government met with public outcry.

Betancourt’s spiritual journey has been a comfort. She says she has found God in various forms—first in the memory of the religious devotion of her dead father, then in the Bible, where she found “precise” and “specific” answers to questions about her life and forced her to examine what made her human. She views the operation that freed her not as a fortuitous event but as a miracle.

“My liberation was the result of a conversation with the sacred heart of Jesus,” she says. Betancourt prays at the Lourdes shrine in France in July 2008, a week after being freed. (AP Photo/Bob Edme)

Feelings of injustice about her circumstances proved difficult for Betancourt. Adapting to things that she can’t change has been a theme of her life. When faced with a tragedy or great difficulty, some people build an impassable wall between themselves and the world, says Betancourt. Yet living with sorrow and anger means living in the past, and Betancourt says she is looking to the future.

“Jesus Christ teaches that every calamity can be a challenge to become stronger, to become better human beings,” she says.

That doesn’t mean that overcoming adversity and looking forward is easy. In fact, the easy path is getting stuck in grief. Looking forward requires strength, and it took Betancourt about four years until she felt she could have a normal life. Betancourt doesn’t call this time a recovery—instead she refers to it as a ‘rebirth.’ The trauma of her experience in captivity made her reflect on her values and relationships with others, with the world and with God. Betancourt says her old world had been torn apart and she had to begin rebuilding from the beginning.

“Coming back to freedom after a long time is not easy, one has to relearn human relationships,” she says. “One of the greatest difficulties for victims of kidnappings when they come back to their previous lives is that the people who surround them tend to think that with liberation everything has come to an end. That is somehow a denial of everything the victim has lived during captivity. It is difficult for people to understand how hard it is to establish intimate relationships again.”

Even six years after her release, Betancourt says that everyday she does a mental exercise of forgiving her kidnappers. That exercise is one that may have to be repeated across Colombian society. With the FARC and the Colombian government nearing a peace deal to end the five-decade long civil war that has left an estimated 220,000 dead, people on both sides of the conflict will need to reconcile.

“What is most important right now is for Colombians to not be subject to manipulation anymore and talk about peace being possible wherever we go, without fearing to be contradicted," says Betancourt. “The country has reached a state of maturity in its reflections that allows for a solid and long-lasting peace. Everybody must gather the necessary strength to make forgiveness and peace a reality.”