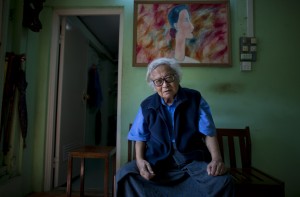 In this Oct. 24,2013 photo, Win Tin, a former prisoner of conscience and an opposition party stalwart who spent 19 years in prison, poses for a picture at his home in Yangon, Myanmar. The meetings Khin Nyunt, a former junta leader once known in Myanmar as the Prince of Darkness, has had with former prisoners of conscience have been rare, and some have occurred by chance. Khin Nyunt ran into Win Tin during an awkward moment at a funeral.(AP Photo/ Gemunu Amarasinghe)